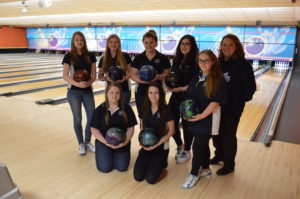 Columbia girls bowling will take its best shot at a state championship this weekend in Buffalo after winning the Section II title in thrilling fashion on February 4.

After leading most of the Section II Tournament, Columbia was pressed hard by seven-time defending champion Colonie. The winner would be decided in the 10th frame.

In that huge moment, and admittedly nervous, Hart delivered. She threw a strike and clinched the Section II title for her school.

It was Columbia’s first bowling sectional title since 2008 when Hart’s older sister Brittany was on the team. “I guess the Hart family is the secret,” Samantha said laughing.

Columbia is one of 10 schools competing from throughout the state.

Sophomore Heather Aiken believes the team’s balance and depth distinguishes them from other teams that have one or two top bowlers.

“We all have the potential to score top games,” she said. “As long as we’re relaxed we’ll do well.”