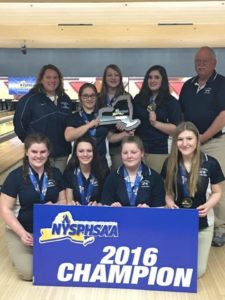 Columbia High School has the best girls bowling team in New York State. The team proved that on Saturday by winning the state tournament in Cheektowaga, its first state title since 2001.

“The girls waited until their name was called to actually believe it,” head coach Lisa Johnas said.

Columbia bounced back from a sluggish first game, in which they sat in third place to start the tournament. But strong second and third games vaulted them into first place and a 65-pin lead after the morning session.

The rest of the team persevered and helped hold off East Islip from Section XI to win by 56 pins.

“Our girls had a great attitude. No one ever got down and that’s what carried us through,” Johnas said.