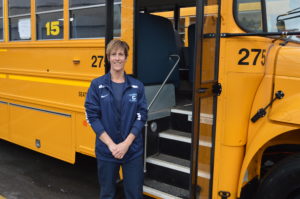 It’s fitting that when Jill Bonesteel heard that she had received the 2016 Excelsior Award from the New York State Public High School Athletic Association (NYSPHSAA), she had to get off a treadmill at the gym.

Athletics have played a big part in her life. She pitched for the Columbia softball team while in high school, coached youth softball for years and is now being honored for her volunteerism with Columbia’s All Sports Club, the District’s athletic booster program.

The Excelsior Award recognizes a CSEA member in a NYSPHSAA school who helps promote and foster athletic spirit in their local school district above and beyond their daily job.

“On behalf of the nearly 800 NYSPHSAA member schools, I would like to congratulate Jill on receiving this award,” said Robert Zayas, NYSPHSAA Executive Director. “She truly embodies what the Excelsior Award represents, and her commitment to the students of New York is remarkable. We are proud of her contributions in the East Greenbush community and hope others will follow in her footsteps.”

Bonesteel, who works as a bus driver for East Greenbush Central School District, has volunteered with Columbia’s All Sports Club for the past 10 years. Some of her duties include:

“It’s a great group of people,” she said. “They do so many great things for all our sports.”

“It’s nice to be recognized, but that’s not why you do it,” she said.

Bonesteel joined the All Sports Club in 2006 after attending Meet the Coaches Night with her daughter.

“You see where all the hard work goes. It goes to everyone, even students who don’t play sports because hopefully it adds to school spirit,” Bonesteel said.

The Excelsior Award is sponsored by the NYSPHSAA and CSEA.