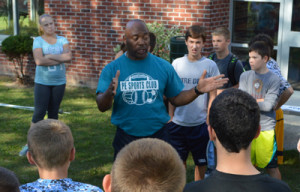 Sankey received the surprise announcement from EGTA President and Goff English teacher Sean Crall at the beginning of study hall. Sankey was taking attendance and then “all of a sudden Sean walked in,” Sankey said. “I was shocked.”

Sankey, who has worked at Goff Middle School for 14 years, teaches students health and fitness through units in aerobics, basketball, flag football, soccer, volleyball, weight training, and even line dancing. Sankey relates to the kids by sharing his own experiences. When some of the middle school boys inevitably complain about line dancing, Sankey tells them about his African dance class in college and how dancing can improve skills used in other sports.

In class last week, Sankey demonstrated a standing long jump for seventh graders in the gym. After showing them the proper technique, he had one student mirror his motion and then attempt a jump.

“That was good. That’s almost a perfect score,” Sankey told him. “You can do better.” 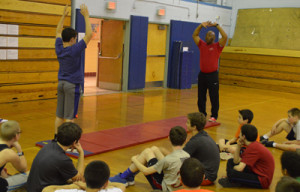 The student listened to Sankey’s instructions again, and on the second jump, improved his score.

“Mr. Sankey is the embodiment of a selfless and humble teacher who continues to give of himself for the betterment of our students,” said Goff Middle School Principal Wayne Grignon. “Mr. Sankey’s positive personality brings a smile to everyone he meets.  I can think of no one better to receive this prestigious honor from the EGTA.”

In addition to coordinating the activities that get students moving, Sankey reinforces math concepts such as geometry, probability and statistics during his classes. Whether it’s pointing out quadrants on the gym floor or calculating free throw percentage, he makes connections to support other schoolwork.

“There’s an educational side to it, and we have fun at the same time,” he said.