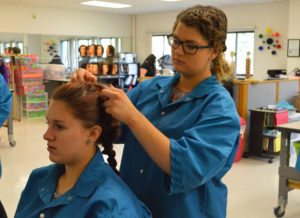 Ever since Columbia senior Alyssa Casatelli was in kindergarten, she’s wanted to be a cosmetologist.

“I love making people feel beautiful,” she said Friday morning as she braided a classmate’s hair from behind a salon chair in the Rensselaer Education Center cosmetology lab.

Casatelli spends every weekday morning there practicing her trade. Then she returns to Columbia High School for classes in the second part of the day.

When she graduates in June, she’ll become a full-time stylist at Studio I Hair Designers in East Greenbush where she’s been working part-time since October.

“She’s got the personality along with the technical skill to do very well in this industry,” Baron said.

Casatelli showed off her technical ability in the SkillsUSA State Tournament, placing second in the job skill demonstration event and first among cosmetology students. She earned a spot in the National Championships on June 22 in Louisville, Kentucky, the first time a Columbia student has made it that far in the competition.

SkillsUSA is a national organization for high school students enrolled in career and technical education programs such as cosmetology, carpentry and automotive mechanics.

The state tournament began with 30 students performing a hair style demonstration in front of two judges. That group was trimmed down to 10 students for the final round. Casatelli won her event by performing a Braided Flower Updo on a mannequin.

“It was unbelievable,” she said.

At Nationals, Casatelli will take a written exam to test her knowledge of cosmetology and then perform a technical skill demonstration. She’ll be accompanied by Baron and SkillsUSA advisor Teresa Mills.

“I am really excited,” Casatelli said. “My goal is to advance to worlds in Brazil.”