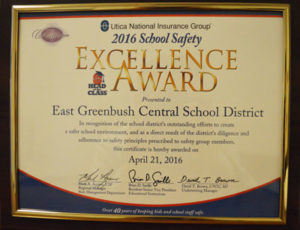 For the 13th consecutive year, East Greenbush Central School District has received the School Safety Excellence Award from Utica National Insurance Group. The District was one of 145 school districts and Board of Cooperative Educational Services (BOCES) from across the state to receive the award.

The award, presented annually to Utica National’s clients, recognizes school districts’ safety efforts as they work to help keep students, staff and visitors safe. Schools are measured in a number of areas such as transportation, playground safety and bullying prevention programs.

“Safety and health concerns continue to be a priority in our school districts,” said Brian Saville, resident senior vice president in Utica National’s educational institutions unit. “Districts that go ‘above and beyond’ to provide a safe, healthy and focused culture for learning are to be applauded, and we’re pleased to count East Greenbush Central School District among them.”