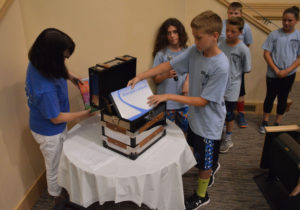 As the United States of America was clawing its way out of the Great Depression, a controversial project to build a $1 million school in East Greenbush and centralize the surrounding towns’ students into a K-12 building moved forward.

That school, which has been modified over the years to accommodate changing student populations, is now Citizen Edmond Genet Elementary School which celebrated its 75th anniversary Thursday evening.

School officials opened its doors to welcome current students and their families, staff, community members and alumni to the special event. The evening included student performances, a video tribute, a dedication ceremony and tours of the building.

“It was quite exciting,” said Mabel Duesberg Witbeck ’41, a member of the school’s first graduating class. “I enjoyed my school. I never wanted to miss a day.” 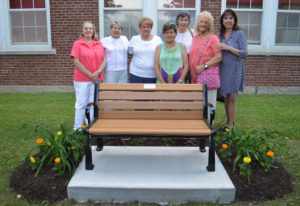 “For the past 75 years, this school has been the center of the East Greenbush community,” said Superintendent Dr. Angela Nagle.

The 75th anniversary celebration began in the auditorium with the 5th grade chorus singing “Chattanooga Choo Choo” under the direction of music teacher Megan Scolaro and the 5th grade band and orchestra playing a medley of 1940s music arranged by band teacher Bob Halek.

First grade teacher Susan Blander and Student Council members placed items in a time capsule to be opened on the school’s 100th anniversary. They included a 2016 yearbook, samples of student work, copies of the Times Union and Troy Record newspapers dated June 2, 2016, and other mementos.

“We wanted to give people a snapshot of what life was like at Genet,” Mrs. Blander told the audience.

Genet’s 75th anniversary was organized by a committee of staff during the past year and teachers incorporated it into the curriculum. 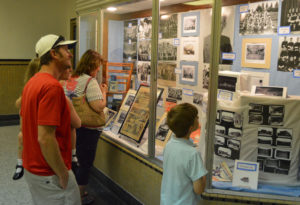 “It’s really valuable for children to know their history and where they come from,” said Genet Principal Ana Yeomans.

At the event, guests viewed exhibits of student work and memorabilia and wrote personal reflections to be included in the time capsule. Other highlights included a video tribute featuring interviews from alumni and a bench dedicated in the courtyard by the Class of 1960.

“We hope this bench will become a place of comfort and rest for all who use it,” said Lynne Butts Strevell ’60.

After the dedication, guests enjoyed cupcakes and a 75th anniversary cake, which was cut by Mrs. Witbeck.

Genet’s 75th anniversary celebrated the rich history of this school community, from its early days as a state-of-the-art school that some feared would never be filled to a fixture in the community serving students in grades K-5.

“It’s a beautiful school. It always was,” said Maida Bogoslofsky ’60.

All of the 75th anniversary events throughout the year were sponsored by the Genet PTO.