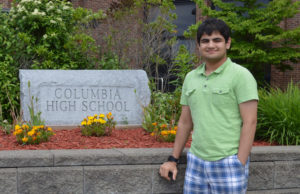 Parth Bhide ’16 was named Valedictorian of Columbia’s Class of 2016 at the Columbian Awards Ceremony on May 19. He has a weighted GPA over 100 and is a member of the two-time Science Olympiad State Championship team.

Bhide also participated in Columbia’s Science Research Program the past two years. He researched semiconductor nanocrystals with a Union College professor in an effort to increase efficiency of solar panels.

Bhide will be attending Rensselaer Polytechnic Institute in the fall where he will study chemical engineering.

Q: When did you find out you were named valedictorian?
A: Principal Sawchuk called me down two days before the awards. He told Noah (Schwenzfeier) and me that we had been selected and that he would announce it formally at the awards ceremony.

Q: And what was your reaction when he told you?
A: I was pretty excited. I was glad all the efforts have paid off.

Q: Had this been a goal of yours?
A: I was hopeful. I wouldn’t say it was a goal of mine, but just to do the best that I can.

Q: What’s your favorite memory from high school?
A: It has to be with Science Olympiad. We went to the national competitions the last three years. The past two years we won the state tournament. Going up there after they called our name, that’s definitely the best moment I’ve had. 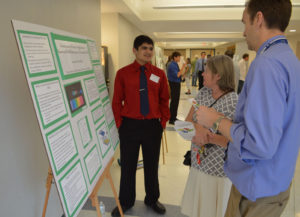 Q: What are your career plans?
A: I want to go into research, so maybe go through postgraduate school and then either work as a professor or researcher.

Q: What was your experience like in the research program?
A: The best part of the research program was that I got to go to three competitions this year. One of them was in Arizona so it was just great seeing all of the different research, yet everyone has the same passion. While I was there I was thinking this is something I’d love to do for the rest of my life.

Q: What are you going to miss most about Columbia as you graduate and move on to college?
A: All of the people I’ve met here. I’ll be able to keep learning at college, and that’s really what I value most out of school, but just all the people here that I might not see again.