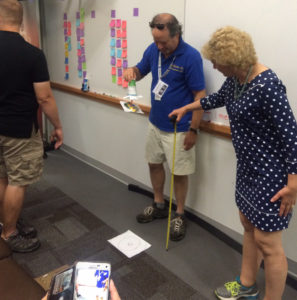 Goff Middle School science teacher Marian Roohan was one of 25 teachers from across the country to attend a weeklong conference at NASA’s Goddard Space Flight Center in Maryland earlier this month. She learned about NASA’s latest discoveries as well as new classroom experiments aligned to the Next Generation Science Standards.

Mrs. Roohan participated in 16 hands-on activities led by NASA scientists, which covered topics such as asteroids, meteorites and moons of Mars. She and the other educators were taught as if they were middle school students, conducting the experiments and then discussing as a group how they could incorporate the lessons for their own students.

Mrs. Roohan also went on private tours of the National Museum of Natural History and the National Air and Space Museum.

“It helps me motivate my students because they’re interested in space,” she said. 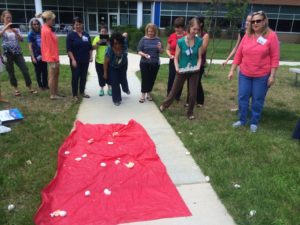 Teachers simulate the early and late bombardment in our solar system by breaking hard-boiled eggs.

While at the DREAM2Explore conference, Mrs. Roohan and her colleagues saw the James Webb Telescope being built and met project scientist George Sonneborn who discussed the mission. The Webb, as it’s called, will be launched into space in October of 2018 and will become an observatory for thousands of astronomers over the following decade.

“I love education because I can go learn and then share it with my students,” she said.

“Mrs. Roohan is consistently looking for ways to improve her teaching craft by seeking out new and innovative teaching techniques to engage students,” said Goff Principal Wayne Grignon. “She shares that information with her colleagues for the betterment of all students at Howard L. Goff Middle School.”