On the Campaign Trail in French Class 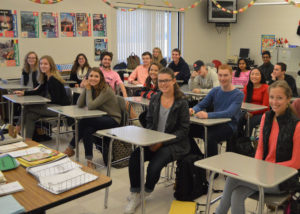 Current events can often bring classroom assignments to life. Take the United States presidential campaign, which has received constant coverage this year and will conclude with the election on November 8.

French teacher Patty Hannmann incorporated the campaign into her French 4/5 class. Students wrote short essays about the presidential campaign, completely in the French language. They used political vocabulary such as une campagne électorale (an election campaign) and la politique étrangère (foreign policy) to describe the campaign and its relevant issues.

“It was an interesting assignment because everyone has different opinions,” said Ellen Murphy ’18. “It helps us learn how to talk about present day issues in French.”