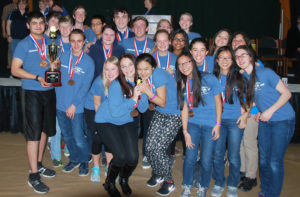 The money will be used to purchase supplies used in experiments such as robotics equipment, fossil identification books, rock samples and balsa wood planes. It will also help fund the team’s travel to MIT for a competition in January.

“For us it validates what we’re doing,” said Science Teacher Diana Prout, who coaches the team. “It’s a big deal for Regeneron to support us. They were just so positive about it.”

Science Olympiad is recognized as one of the nation’s most prestigious science, technology, engineering and math (STEM) competitions. It tests students with rigorous hands-on and lab events that cover topics in physics, astronomy, chemistry, meteorology and engineering.

Columbia, which won the 2015 and 2016 state championships, will host the Columbia Science Olympiad Invitational on January 7.

Students on past Columbia Science Olympiad teams have gone to prestigious colleges such as Harvard, Cornell, Dartmouth, Princeton and Johns Hopkins.

“This kind of community support makes such a difference for our students,” Mrs. Prout said.