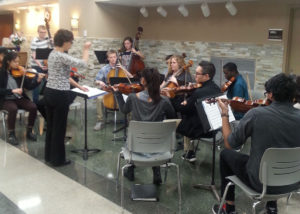 Veterans at the Stratton VA Medical Center in Albany felt like they were at Carnegie Hall last week when 13 students from Columbia’s Chamber Orchestra played a 60-minute concert for them.

Led by music teacher Sue Chrzan, the students played a variety of songs including classical, fiddle, folk and bluegrass.

One of the veterans in attendance expressed his thanks by writing the following to a Columbia teacher:

“As I left my appointment at the Stratton VA in Albany I was greeted by a small orchestra comprised of Columbia High School students as I got off the elevator. They were met by whoos! and bravos! after every piece they played. It was really something else. So thanks for shaping some of their brains. I certainly know they’re in good hands. If any of those young people are students of yours personally please pass on this to them: Bravo, bravo, bravo. Absolutely beautiful what you did.”