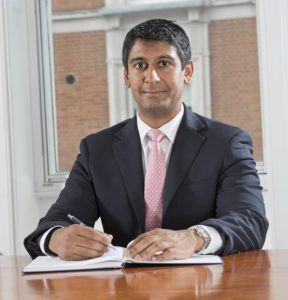 Neil Swami ’03 still has the yellow Goff Science Olympiad t-shirt he wore as an eighth grader when the team went to Nationals in 1999. It speaks to the pride he has for where he comes from and an academic club that propelled him to a successful career.

“It was super baggy back then and now it barely fits,” he said, “but I love that thing.”

Mr. Swami, who spent six years in Science Olympiad and then went on to Princeton University, is now a partner for the healthcare investment firm MVM Life Science Partners in Boston. His firm researches and invests in companies that develop medical equipment and health technologies.

It’s a job he loves, and one that has striking similarities to some of the experiences he had with Science Olympiad more than a decade ago. He recalls working with teammates on projects and reading scientific papers.

Because of the positive impact Science Olympiad had on him as a student, Mr. Swami recently made a generous donation to the program. 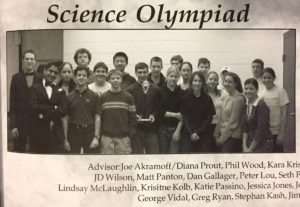 Neil Swami with the Columbia Science Olympiad team in 2003.

“It meant so much to me,” he said. “I just want others to have the same opportunity that I had.”

Mr. Swami is one of many standout graduates who participated in Science Olympiad. Just look at some of the colleges they matriculated to – Harvard, Cornell, Dartmouth, MIT, John Hopkins, Williams, Wake Forest, William and Mary, Boston College and RIT.

“Columbia Science Olympiad alumni are doing amazing stuff in STEM fields,” said head coach Diana Prout. “From nuclear physicists integral in the discovery of the Higgs boson particle, to biochemists and chemical engineers working to develop drugs to help patients with diseases. There are also a variety of engineers building bridges, missiles, and the smallest man-made drones. Not to mention the computer programmers, game developers and those working to bring wind power and clean water to 3rd world countries.”

Mr. Swami has enjoyed the recent accomplishments of the Columbia Science Olympiad team which has won two consecutive state championships. And he knows, as well as anyone, how involvement in an academic club can lead to success later in life.

“If you’re interested in this, you can make a career out of it,” he said. “It’s cool to be nerdy.”