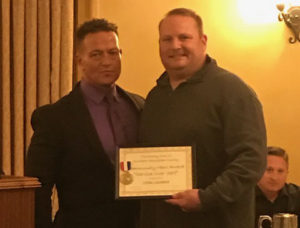 District students and staff were honored at “A Community Celebration Night” sponsored by the Rotary Club of Southern Rensselaer County on Tuesday evening at Moscatiello’s Restaurant.

Columbia Principal John Sawchuk, who is also a Rotarian, organized the event.

“What a great way to spend an evening recognizing individuals who never seek recognition and spend most of their time helping others,” Mr. Sawchuk said.

Five students from Columbia and three from Goff received Outstanding Student Awards for exemplifying the Rotary’s motto of “Service Over Self.” Additionally, Taylor Milkiewicz ’18 won the Distinguished Student Volunteer Award and Emily Mann ’18 was given the Girl Scout Service Award.

Goff Educator of the Year

The Boy Scout Service Over Self Award

Local Business Give Back Award

The “Break Out Rotarian Award”