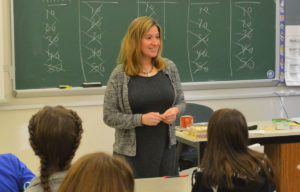 Columbia social studies teacher Wendy McAlonie is passionate about history and about teaching, so it makes perfect sense that she loves her job. Even her kids at home know this, saying that she doesn’t go to work, “mom goes to school.”

On Wednesday morning, as Mrs. McAlonie was about to give her students in Global History an exam, she was surprised by Principal John Sawchuk and Sean Crall, a Goff English teacher and the president of the East Greenbush Teachers Association.

Mr. Crall walked into her classroom, presented her with a bouquet of red flowers, and told Mrs. McAlonie and her students that she had been named the EGTA Teacher of the Year.

“I was really overwhelmed and really surprised how emotional I was,” said Mrs. McAlonie, who was applauded by her students.

This is Mrs. McAlonie’s 19th year teaching history at Columbia, which she believes is more important than ever.

“I think there’s more of an interest in history than ever before because kids want to understand the current world they live in,” she said.

“It has been my pleasure to work with Wendy since I arrived at Columbia,” Mr. Sawchuk said. “She is a true professional who always puts kids first – one of the finest teachers I have ever worked with.” 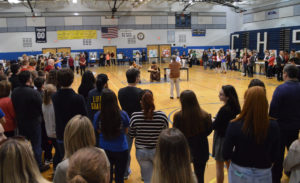 Students, staff and community members watch a demonstration at the 2016 Multicultural Fair.

“The Multicultural Fair was one of the most important things I’ve done as a teacher,” said Mrs. McAlonie, who serves as the Social Studies Department Chair. “I think it helped bring the community together and it was a very positive experience for our students.”

The EGTA Teacher of the Year award, which is voted on by the district’s teachers, has been given out annually since 1970.

“This award has special significance because it is your peers who are recognizing your excellence,” Mr. Crall said. “The teachers of the East Greenbush Teachers Association are a special group of people who always go beyond what is expected for the children they serve. Their recognition of Wendy McAlonie speaks volumes to her dedication to her students and her craft.”

After Mrs. McAlonie’s moment of recognition concluded on Tuesday, and class resumed, she told her students, “I hope one day you all can have a job that you enjoy as much as I do, and are passionate about as much as I am.”