Board of Education Adopts Proposed Budget; Goes to Vote on May 16 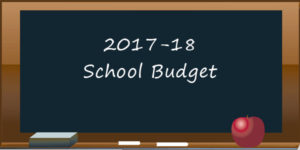 The Board of Education adopted the proposed school budget for 2017-18 at Thursday’s Board of Education meeting at Red Mill Elementary School. The proposed budget, which has been updated since the New York State budget was approved, totals $92.2 million, an increase of 2.25% from last year.

The proposed tax levy increase is 3.7%, which is consistent with the New York State tax cap of 3.7%, requiring a simple majority to pass the budget.

The proposed budget, which maintains all current programs and services, will be voted on by District residents on Tuesday, May 16.

“The proposed budget remains within the tax cap and expands internship programs for high school students, improves computer skills instruction for elementary students through the restoration of two library media specialist positions and ensures the safety of our student athletes through the incorporation of baseline testing into our concussion management practices,” said Superintendent Jeff Simons. “All in all, the budget is good for kids and maintains affordability to taxpayers.”

The proposed budget’s tax levy increase dropped to 3.7% from the preliminary budget due to increased Foundation Aid from the state, health insurance savings and refunds, and reduced energy expenses.

In addition to the school budget, voters will decide on two school bus propositions, a $39 million capital project broken into three separate propositions and elect three Board of Education members.

As part of the District’s bus fleet management plan, it plans to trade-in 10 older school buses and replace with new buses that have better fuel efficiency, lower emissions, improved safety features and lower costs for maintenance and repairs. Eight of the buses will be purchased from the District’s Reserve Fund with no impact to taxpayers. The other two buses will be purchased through a bond referendum with the first payment coming in 2018-19. The district would be reimbursed for approximately 60.2% of the total school bus purchase.

The proposed capital project would address aging infrastructure in all buildings, such as roofs out of warrantee; safety and fire systems; plumbing, electrical and masonry; classroom modernization; and re-paving of parking lots. The $39,796,042 capital project will have no additional local tax impact. The district will be reimbursed for approximately 72% of all eligible projects, and the local share of the cost will be tax neutral due to the retirement of district debt following the 2019-20 school year.

2017-18 Budget Vote and Board Election Ballot

Board of Education election

Voting Information
The Budget Vote and Board Election is scheduled for Tuesday, May 16 from 7:00 a.m. to 9:00 p.m.

Budget Timeline
Residents can learn more about the proposed budget by attending public meetings ahead of the vote. Click here to see the schedule.