Generations of families have gotten to know John Caporta since he became Red Mill Elementary School’s principal in 1993. He’s a visible presence at the tucked away neighborhood school, greeting kids coming off the bus in the morning, stopping by classrooms during the day and visiting with families at after school events.

Even with all the changes in education over the years, Mr. Caporta still sees it as a “people business.”

“Ninety percent of it is interacting with staff, students and parents. And that has remained the same,” he said.

Mr. Caporta was recognized for his exceptional leadership last week when he received a Principal of the Year award from the Capital Area School Development Association. The event “recognizes educators and administrators whose tireless energy and selfless dedication are the pulse of our schools.”

Mr. Caporta has embodied those words throughout his career, leading to academic excellence. Red Mill students continue to perform at a high level compared to state and regional averages. (Red Mill’s proficiency rates are 74% for math and 70% for ELA compared to the statewide averages of 39% for math and 38% for ELA.)

And in 2011, Red Mill was named a National Blue Ribbon School, the country’s highest honor for public and private schools. That year, only 305 schools won the award out of nearly 130,000 from across the country.

Just as important as academic achievement, Red Mill is a caring community, which is fostered by Mr. Caporta. He instituted the first Student Council at the school, emphasizes character education through regular programming and invites family members into the school for Grandparents and Special Friends Day.

“I’ve been amazed at the sense of community that exists at the school,” wrote Seth Tracy, a Red Mill parent and one of many people to submit letters in support of Mr. Caporta’s nomination.

Mr. Caporta joined East Greenbush Central School District in 1989 when he became an assistant principal at Genet, back when it was an intermediate school for fifth and sixth graders. Before that, he was an elementary school teacher in Bethlehem for 10 years. 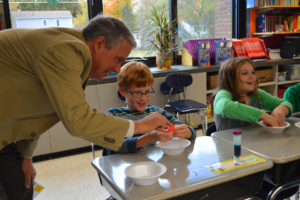 “I’ve been really lucky,” he said. “I’ve been surrounded by quality staff members and administrators throughout my career.”

Mr. Caporta generously shares his expertise with others by serving on many district-wide committees, such as Curriculum Study, APPR and Safety, but also by mentoring other educators.

“John was a model of the principal as a true instructional leader,” wrote Nancy Andress, who supervises graduate students seeking their administrative certifications through The College of Saint Rose. “Interns commented frequently on what they learned about human relations skills, working with parents, teacher supervision and teaching the whole child.”

Mr. Caporta, true to his leadership style, acknowledged others upon receiving this surprise award, and why education is so important.

“I don’t see this as an individual award,” Mr. Caporta said. “You can’t have success in a school without it being a team effort. We all have to work together. And when we do that, we make a difference for students.”