Fired Up for Science 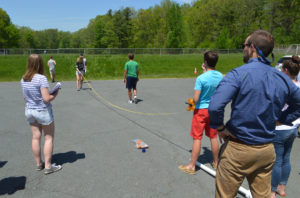 Physics students studied projectile motion in a recent lab by getting out of the classroom and using a homemade canon to launch potatoes behind Columbia High School.

Science teacher Tom Ross loaded the canon, which he built, with potatoes and then sprayed deodorant inside the barrel and quickly closed the back end. He pointed the canon up and towards the open field behind school, counted down and then pressed the grill lighter button to launch the potato.

The potato shot out of the canon with a low “boom” and then landed in the field.

“This lab is directed by students,” Mr. Ross said. “I give a little support in terms of planning and safety, but in general they plan the lesson, what to find and how to find it.”

Each student had a different role – retrieving the potatoes, recording time, measuring distance – so they could make calculations from the experiment.

The best launch had the following measurements: