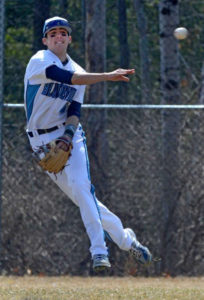 Former Columbia baseball stars Kevin Smith ’14 and Will Gorman ’13 had their dreams come true this week when they were selected in the 2017 Major League Baseball Draft.

Mr. Smith was selected by the Toronto Blue Jays in the fourth round (129th overall) and Mr. Gorman was taken by the Arizona Diamondbacks in the 32nd round (952nd overall).

Mr. Smith, who just completed his junior year at the University of Maryland, was a standout shortstop and pitcher for the Columbia Blue Devils in high school. He won two team Most Valuable Player awards and is one of only six Columbia pitchers to ever throw a no hitter. He was awarded the 2014 Rawlings Gold Glove Award, which honored him as the finest high school shortstop in the country.

This past season, Mr. Smith batted .268 and led the Maryland Terrapins with 13 home runs and 48 RBIs.

Mr. Gorman just graduated from the Rochester Institute of Technology with a degree in chemical engineering. As a senior, he set single season school records with 10 home runs, 50 runs scored, 34 walks and 107 total bases, and became the first RIT player to be drafted in 34 years.

“I’m thrilled for both Will and Kevin as they move another step closer to their dreams of becoming Major League Baseball players,” said Columbia baseball coach Chris Dedrick. “It was an honor to have coached them. I wish them the best of luck and have no doubt that they will continue their pursuits of excellence both on and off the diamond.”