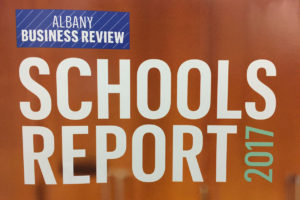 The annual report ranks all 84 K-12 public school districts in the 11-county Capital Region based on state test results and graduation rates from the New York State Education Department.

East Greenbush CSD has been ranked in the top 10 each of the past eight years.

In addition to the overall rankings, districts were scored by subject area, based on statewide assessments from the elementary Common Core exams to high school Regents exams. East Greenbush CSD ranked 3rd in English and 5th in Math.

“The success of our students reflected by these rankings is a credit to the continued collaborative efforts of our teachers and support staff, guided by the administration and the Board of Education, and supported by exceptional parents, families and community members,” said Superintendent Jeff Simons.