Board of Education President Announces Resignation; New Officers Elected for 2017-18 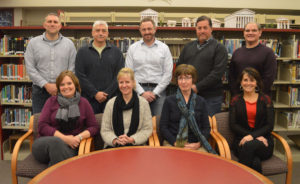 Dr. Shay Harrison announced his resignation from the East Greenbush Central School District Board of Education at last week’s meeting, concluding seven years of service, including the last six as president.

Following the announcement, the Board elected its officers for 2017-18. Michael Buono will succeed Dr. Harrison as president, while the other three officers – Mark Mann (vice president), JoAnn Taylor (deputy treasurer) and Karen Curran (assistant clerk) – were re-elected to their current positions.

“I am honored to become the new school board president for the East Greenbush Central School District,” Mr. Buono said. “We have a lot to be proud of as a school community and I look forward to working with the board and our superintendent in this new role. I also want to thank Dr. Shay Harrison for his outstanding leadership and his many years of board service. His leadership and dedication to the district and its students has been outstanding.”

Since Dr. Harrison joined the Board of Education in 2010, East Greenbush has been ranked in the region’s top 10 school districts each year, Columbia’s graduation rate increased from 83% to 91% and voters approved every school budget and two separate capital projects to improve school buildings.

All of this was accomplished during uncertain times for public education, including significant budget constraints caused by the Great Recession, implementation of the state tax cap and changes in curriculum and testing to meet the Common Core learning standards.

“It has been a pleasure to serve for seven years on the East Greenbush Central School District Board of Education,” Dr. Harrison said. “I graduated from Columbia in 1990 and I owe an immeasurable debt to the District for preparing me to contribute to society as an adult. I hope my time on the Board has helped pay back in some small measure the benefits the District gave to me.”

“My resignation from the Board does not reflect anything negative about the District or the Board,” he continued, “rather, the reality of my employment at a local start-up company is presenting me with a very demanding and challenging opportunity that will consume a significant amount of time and prevent me from giving the level of attention I need to provide to my Board member responsibilities. I want to thank my fellow Board members who demonstrated great professionalism and integrity as we dealt with a range of issues in which we didn’t always agree but always showed respect and consideration for each other’s perspectives. And I want to thank the community for giving me the opportunity to serve.”

The Board of Education will discuss and determine the process to fill the vacant board seat at its next public meeting on Wednesday, July 26 at 6:00 p.m.

The Board of Education is a team of nine volunteers elected by school district voters to establish policy and set direction for the administration. They hold public meetings twice monthly.