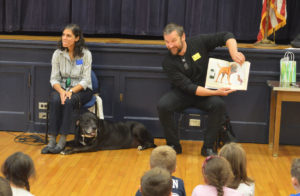 Many students at Donald P. Sutherland Elementary School are familiar with Truman, the gentle black Labrador and mastiff mix therapy dog who they read to throughout the school year.

On Monday morning, they learned what inspired his name when they met children’s book author Dan Harper who discussed his book “Sit, Truman!” about a big, slobbery mastiff who gets into mischief.

Mr. Harper read the book to the students and then answered their questions about writing and books all while Truman the therapy dog sat next to him. Mr. Harper noted that the main character of the book, Truman, was based on his father-in-law’s friendly dog who would jump up on him as he entered the house.

Special thanks to parent volunteer Amy Spairana who coordinates the therapy dog reading program and to Truman’s owner Antonette Perry.