Recycling Project Could Be a Home Run for Bell Top 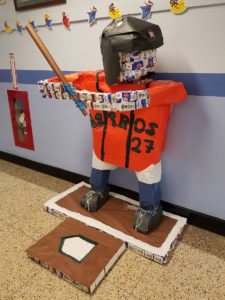 Students at Bell Top re-used 718 empty milk and juice cartons to create a baseball player for the Made By Milk 2017 Carton Construction Contest. The theme of this year’s contest is sports and the people’s choice winner will receive $2,500 for their school.

Bell Top’s “Altuve” statue is wearing an orange Astros jersey and in a batting stance in the school’s front hallway.