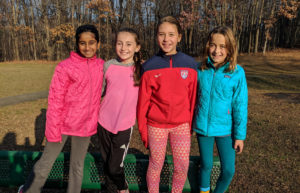 After reading the hugely popular children’s book “Wonder” by R.J. Palacio, Bell Top fifth graders took a field trip to see the movie and then had an engaging class discussion about bullying. In a culminating project during their literacy block, the students created anti-bullying public service announcements.

“I have never seen the students so involved and passionate about a project,” said fifth grade teacher Lindsey Bernard.

The inspiration for producing anti-bullying PSAs came from a Burger King video that went viral this past fall. In the video, hidden cameras catch real customers ignoring a high school student being bullied by classmates yet they are quick to return burgers that have been smashed, or “bullied” by the Burger King staff. It reveals the inaction on the part of bystanders when it comes to bullying.

The Bell Top students worked in groups to portray bullying that can go on between children. In addition to reinforcing a message of kindness toward others, the project strengthened students’ writing, communication, collaboration, creativity and digital literacy.

Students came up with an idea for the video, wrote a script, acted out the scenes and then produced the video on a Google Chromebook using Animoto.

“We hope to encourage others students to be a leader when they see others who are not being treated kindly,” said fifth grade teacher Sheri Valenti.

Each of the videos will be played for Bell Top’s morning announcements as part of a new segment called “Mindful Mondays.”

“I am very proud of the fifth grade students for their hard work and for the valued commitment of our fifth grade teachers for integrating character education in their classroom as part of their curriculum,” said Principal Martin Mahar.