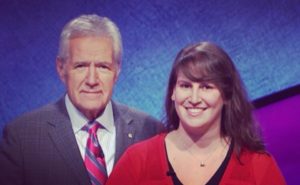 Columbia High School alumna Hannah Ewing ’05 will appear as a contestant on the televised game show ‘Jeopardy!’ this Thursday evening. The show will air at 7:30 p.m. on News 10 in the Capital Region.

After high school, she graduated from Connecticut College and now teaches 6th and 7th grade at a school for children with language-based learning disabilities.

“I grew up watching Jeopardy,” said Ms. Ewing, who took the online test last May on a whim. “It was a whirlwind. I never thought it would actually happen.”

Best of luck to Hannah!