“He’s just the best teacher I’ve ever had,” said one of his students.

Mr. Siver is constantly moving throughout the classroom. During a math lesson earlier this week, he walked up and down the center aisle between desks, posing questions and pausing to help individual students. Then he would walk back to the front of the classroom to point out the differences between regular and irregular polygons on the smart board. A few minutes later, the class had ended and he was bounding out the classroom door leading students to physical education.

“These kids are 10 years old. To go to a workplace where everyone has tons of energy and they’re excited, that’s contagious,” Mr. Siver said. “It’s like the fountain of youth.”

A typical day for Mr. Siver doesn’t end at dismissal. He spends extra time teaching students in the Explore and Grow after school enrichment program, works with students as co-advisor of Student Council and participates in other school-sponsored events.

Mr. Siver also shares his experience as an educator with other staff as a mentoring teacher, a building representative for the EGTA, and a member of both the Principal’s Advisory Team and the MakerSpace committee.

Genet Principal Ana Yeomans said she is proud to work with a teacher of his talent and dedication.

“Scott Siver exemplifies what it means to be a true professional educator,” Mrs. Yeomans said. “He is focused on quality instruction, is always ready to try new approaches, and always gives of himself to our students and school community beyond the scope of the regular school day.”

As the science teacher on the fifth grade team, Mr. Siver teaches science to all four sections. His favorite units include ecosystems and forces of motion. The latter requires students design and build their own cars, and then race them against each other.

“Science is so hands-on,” he said. “Everything is learning by discovery and doing experiments. I like that because it reaches a different type of child. Gifted kids, no matter what you’re teaching them, they get it. But for those kids who don’t have it come quite as easily, they get it in science, and you can see their confidence.” 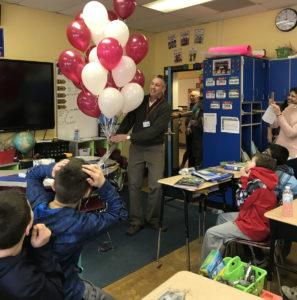 Mr. Siver received the surprise announcement of EGTA Teacher of the Year on Friday morning.

Under the guise of being called down to another teacher’s homeroom to discipline some of his unruly students, he walked into the room and was met with big red and white balloons and applause from students and colleagues.

“They got me pretty good,” Mr. Siver said laughing.

Mr. Siver, a veteran teacher of 30 years, joins a long line of outstanding teachers to be recognized as EGTA Teacher of the Year.

“We congratulate Mr. Scott Siver as the recipient of the East Greenbush Teachers Association Teacher of the Year award,” said EGTA President Drew Romanowski. “To be selected by your peers is one of the greatest honors that a teacher can receive. Mr. Siver is truly deserving of this award.”

Though caught off-guard with the surprise, Mr. Siver said he was honored to receive the prestigious award.

“There are so many good teachers in the building and across the district, that I see myself as representing them more than anything else,” Mr. Siver said. “It is nice to have all the hard work and the extra activities that I do be acknowledged by my peers.”

After the brief celebration, Mr. Siver returned to his classroom and got back to what he does best – teaching.

“I just like to see that light bulb go on in that kid’s head,” he said, “especially the kids that struggle, because I know that I must have done something for that child to help them understand what I’m teaching.”