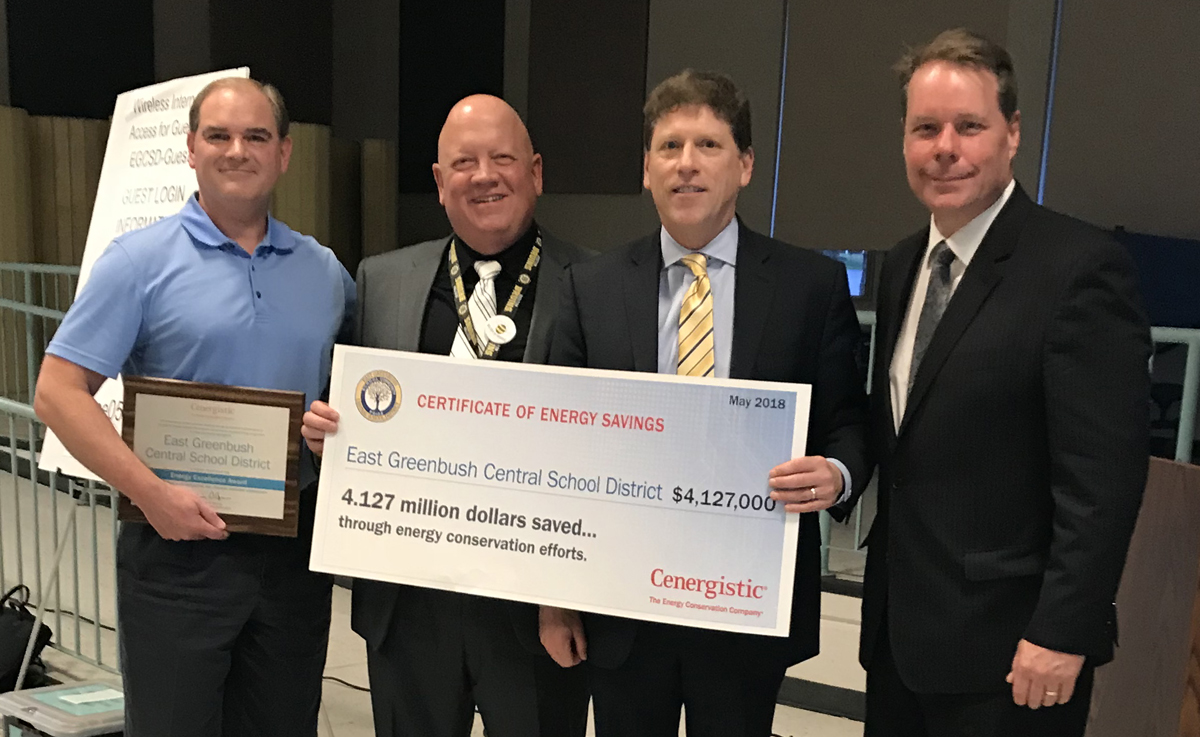 Faculty and staff at East Greenbush Central School District have chalked up more than $4 million worth of energy savings since starting an energy conservation program 10 years ago. Their energy-efficient practices have earned big savings — and now those good habits are earning the organization national recognition.

The District has achieved $4,127,000 in cost savings in 126 months since forming a strategic alliance with Cenergistic in 2007, a national energy conservation company, which presented its Energy Excellence Award to the District at Wednesday’s Board of Education meeting.

“Reaching this savings mark is a significant milestone,” said Dr. William S. Spears, Chairman and Founder of Cenergistic. “East Greenbush Central School District has achieved success by consistently implementing the organizational behavior-based approach to energy conservation and maintaining productive efforts at all levels of the organization. The Superintendent and board, along with other administration, faculty and staff members are to be commended for clearly fulfilling their commitment to being good stewards of the taxpayers’ money and the environment.”

A key benefit of the Cenergistic program is that all costs come out of the existing utility budget, with savings projected to more than pay for the program, as they have done for East Greenbush Central School District.

Additional savings can be redirected to other parts of the budget and help with tax reduction.

“Every dollar saved through our energy conservation program benefits students and taxpayers,” Superintendent Jeff Simons said. “To save in excess of $4 million is a huge accomplishment for our school community.”

The program is directed by Red Mill 3rd grade teacher Thomas Brownell, who serves as the District’s Energy Specialist. He tracks energy consumption — including electricity, water, sewer, natural gas and fuel oil — using energy-accounting software. Mr. Brownell compares current energy use to a baseline period and calculates the amount of energy that would have been used had conservation and management practices not been implemented. By tracking consumption and analyzing energy use, he can quickly identify and correct areas that need immediate attention.

About Cenergistic
Cenergistic is a national energy conservation consulting firm. Cenergistic helps organizations reduce consumption of electricity, natural gas, fuel oil and water. Its proven approach is built on a proprietary methodology which optimizes clients’ infrastructure, improves internal processes and changes behavior to ensure that savings endure. This approach empowers the average client to save 20 – 30% off expected utility bills. For the past eight years, Cenergistic has earned national recognition from the United States Environmental Protection Agency, including the ENERGY STAR Partner of the Year – Sustained Excellence Award in 2011, 2012, 2013, 2014, 2015, 2016, 2017 and 2018.