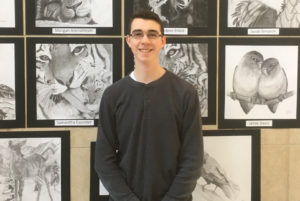 Columbia senior Jonathan Sills ’18 was named to the MasterMinds’ All Star Team and selected as the League Most Valuable Player. He led the seven-team league in both scoring (530 points) and points per half (33.1).

MasterMinds is a trivia competition for local students who answer questions in the areas of art, literature, history, geography, mathematics and pop culture.

Columbia finished the regular season with a 10-2 record and enters the final rounds of the playoffs on Thursday, May 24 at Siena College.

“Jonathan has had one of the most successful seasons in Columbia’s MasterMinds’ team history,” said Columbia coach Scott Monuteaux. “We hope that he continues his great play into the final rounds of the regional playoffs.”