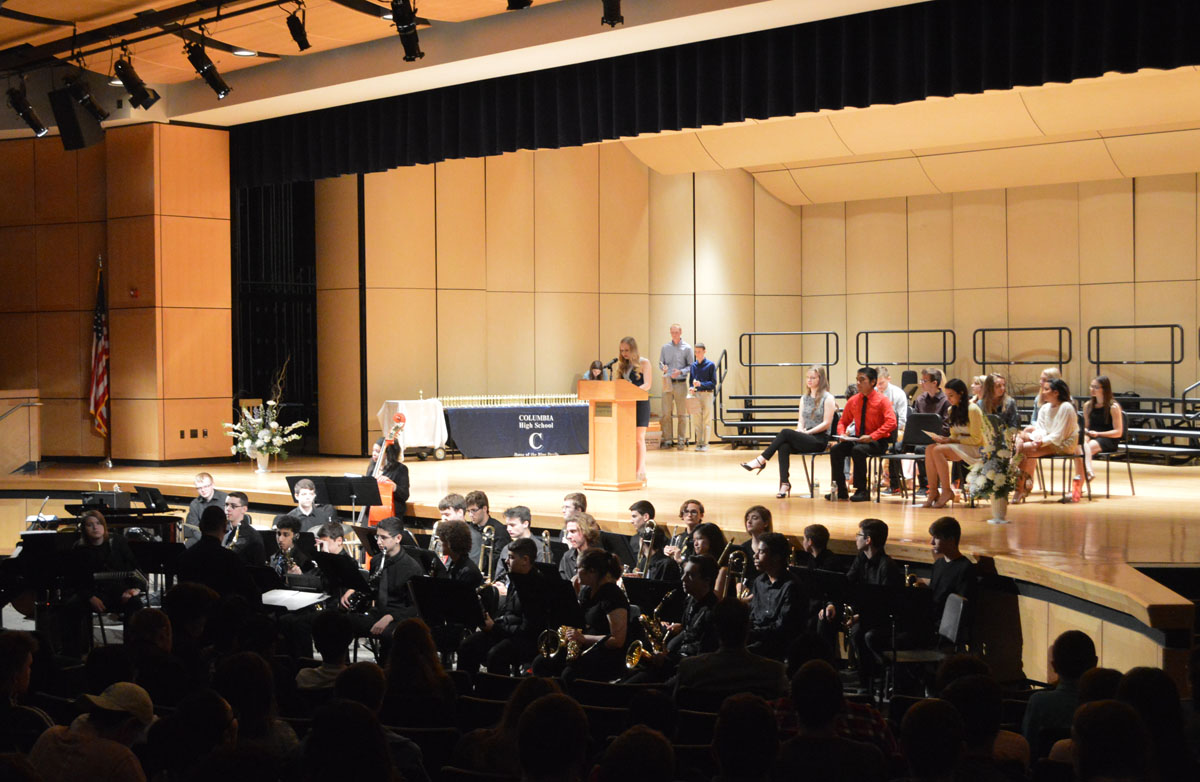 Seniors Natasha Montiel and Jonathan Sills highlighted the 2018 Columbian Awards on Friday as they were named valedictorian and salutatorian, respectively. Both students have had accomplished high school careers, including weighted GPAs over 103. 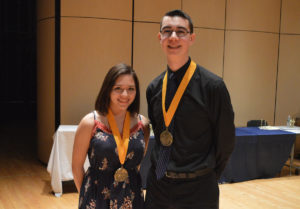 Ms. Montiel will attend Princeton University in the fall where she plans to major in bio-molecular engineering. She is an accomplished member of Columbia High School’s championship Science Olympiad Team and the ‘Les Savants’ chapter of the National Honor Society. Ms. Montiel has attended the People to People Leadership Forum hosted at Harvard University and has participated in the Congress of Future Medical Leaders hosted by the University of Massachusetts.

Mr. Sills will attend Hamilton College in the fall where he will major in biology. He is a member of the Columbia Jazz Ensemble, German National Honor Society, the Mock Trial team and was named Most Valuable Player of the Capital Region MasterMinds league.

More than 170 awards were handed out to students for excellence in academic subject areas, performing arts, clubs and community service. Congratulations!

Art Department Award for Excellence
To the students who have demonstrated consummate skill in art and a strong sense of community spirit.

Edward L. Witko Scholarship
Edward Witko lived for his family, friends and chosen profession. In his ten year career in law enforcement, he served with honesty, integrity and loyalty and was admired by all. He trained with an intensity that gave all who knew him comfort in knowing that he was part of us. In August of 2010, Officer Edward L. Witko died tragically while participating in a motorcycle benefit run for Combat Veterans. This scholarship will be dedicated to the memory of Edward Witko, #29.

The Key Club Award
In recognition of your dedication to Key Club during your high school career.

Peer Leadership
Awarded to a senior who has displayed exceptional leadership qualitiesin club functions and meetings.

Literacy Achievement Award
This award recognizes a junior or senior student who has consistently demonstrated commitment, perseverance, attendance and outstanding achievement in the Literacy Lab.

Harvard University Book Award
Presented to a junior boy or girl who has achieved excellence in academic studies while participating in worthwhile extracurricular activities.

Smith College Book Award
Given by The Smith College Club of Albany to an outstanding junior who exemplifies academic achievement, leadership qualities and concern for others.

Williams College Book Award
To a junior in the top 5% of his or her class who has demonstrated intellectual leadership and has made a significant contribution to the extra-curricular life of the school.

The Traditions of Drama Award
Awarded to a senior who has contributed significantly to an understanding of a love for dramatic works within our school and/or community.

English Department Distinguished Scholar Award
Awarded to the senior who has consistently demonstrated a passion for the English Language and achieved excellence within English studies for four years.

St. Michael’s College Book Award
This is awarded to students who exhibit the characteristics of an ideal St. Michael student, based specifically on achievement in academics and community service. One to the top junior male and female student who have taken on leadership roles within their community service endeavors.

Foreign Language Department Awards
This award recognizes academic achievement in the study of a foreign language.

This award recognizes effort, commitment and enthusiasm to the study of a foreign language.

Faculty Consideration
This award is presented to the most considerate senior in the graduating class.

Faculty Service Award
Awarded to the student who has shown significant assistance to Columbia staff.

Clarkson University High School Awards
Presented to members of the junior class who demonstrate outstanding leadership qualities and have made positive contributions to both school and community. They will qualify for a tuition scholarship should they choose to enroll at Clarkson University.

Wells College 21st Century Leadership Award
Each year a distinguished group of students are selected and recognized by Wells College for their leadership ability, community involvement and academic excellence. This award honors commitment to academics and student leadership. This program is designed to honor these students who embody the spirit, integrity and intellectual qualities of a strong leader.

SRP Outstanding Business Student Award
Given to a senior business student who has excelled in Business education in memory of all departed members of the East Greenbush School Related Personnel support staff.

Dignum and Bame Insurance Agency Awards for Excellence in the Field of Business
Presented to three Business Education students for their outstanding achievements in the fields of Accounting, Marketing and Computer Technology:

RPI Math/Science Award for Excellence
To recognize the superlative academic achievement of young men and women as well as promising juniors who have distinguished themselves in mathematics and science.

Science Research
A three year course which by the end, students must create and perform in an authentic research experiment under the direction of a supervising scientist. A rigorous program which requires time management skills, presentation and writing skills, and research skills in both publication format to develop the experimental question and original hypothesis and also in a laboratory setting. The following seniors have stood the test of time and completed the three year program in grand fashion:

US Air Force Excellence in Math and Science Award

St. Lawrence University Book Award
Awarded to a high school junior who has displayed a significant commitment to community service.

RIT Creativity and Innovation Award
This award recognizes high school juniors who have distinguished themselves academically, are active and involved members of their school and community, and demonstrate outstanding achievement in innovation, creativity or entrepreneurship.

RIT Computing Medal Award
This award recognizes high school juniors who have distinguished themselves academically, are active and involved members of their school and community and demonstrates interest and ability in computing.

Christopher McAfee Memorial Scholarship
Given to a student who will attend college who has an outgoing personality and a drive to succeed in all of life’s ventures and challenges.

Student Council Advisor’s Award
Presented to an active Student Council member who has extraordinary dedication to the school community above and beyond her peers.

Ethnic Coalition Inclusion Award
Presented to a senior who demonstrates an overwhelming desire to promote equality, acceptance and respect for all within our school community.

Daughters of the American Revolution Award
This award is presented for achievement in American History.

Daughters of the American Revolution Good Citizenship Award
To a student who possesses an outstanding degree of dependability, service, leadership and patriotism.

Frederick Douglass and Susan B. Anthony Award
Awarded to a student who has demonstrated commitment to understanding and addressing difficult social issues as well as showing leadership and a dedication to community action. Strong grades and rigorous courses taken throughout their years in the humanities and social sciences.

Len Michon Memorial Social Studies Department Award
Honors the memory of Leonard Michon who was a beloved teacher and Supervisor of Social Studies in East Greenbush for many years. Given to the student who has demonstrated outstanding character, scholarship, leadership and service.

Mayflower Award
Awarded to two students who have demonstrated proficiency in the study of U.S. History and understanding of its Constitution.

Schodack Republican Club Award
Given to a Schodack student who has demonstrated an appreciation of the principles of government and citizenship from the studying of social studies.