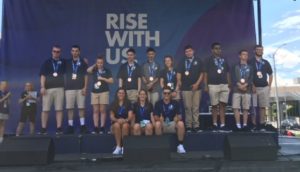 “After a tough loss (on Wednesday) our heads were down and people were emotional so we played a little pick up amongst ourselves and got out of our funk,” said head coach Audra Di Bacco. “Today was a new day and we played hard and together to win the game and ultimately a bronze medal.”

New York had a 3-2 overall record in their pool of the tournament, which included New Jersey, Ohio and Washington.

Unified basketball teams are comprised of athletes with and without intellectual disabilities. New York’s team is made up of current students and alumni of Columbia High School who all have participated on its Unified Basketball team.

Congratulations to the team!