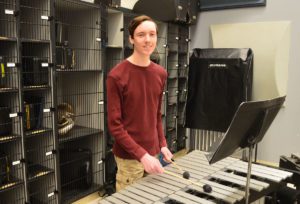 Columbia High School senior Leif Haley ’19 participated in the 23rd annual Electronic Music Composition Showcase at this year’s New York State School of Music Association convention in Rochester, N.Y. Mr. Haley, a percussionist who also plays piano, had two of his entries selected for the showcase out of the eight from across the state.

As part of the showcase, Mr. Haley had an opportunity to work with composition and music theory professors from SUNY Fredonia and the University of Vermont. During those workshops, the professors and other showcase participants listened to, analyzed and critiqued the students’ compositions.

“It was really great,” Mr. Haley said. “It was exciting to hear the other compositions and I found it really helpful to have that feedback.”

The highlight of the conference was the electronic composition recital in the ballroom of the Rochester Convention Center. Each student composer had an opportunity to explain their piece to the audience which was followed by a playing of the composer’s music.

“It is my opinion that music should be interpreted personally, and a particular piece of music should mean something personal to each particular listener,” Mr. Haley told the audience. “Whatever you hear in this piece, I hope it is enjoyed by you and all its subsequent listeners.”

Congratulations to Leif on a job well done!