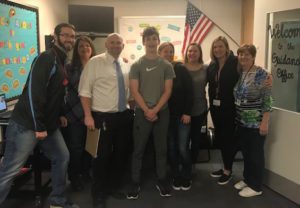 Congratulations to Goff Middle School 8th grader Joseph Bradt who was recognized recently for his academic and athletic achievements. Since entering the MAP program last year, Mr. Bradt has been a diligent student, consistently achieving honor roll or high honor roll. As a result, he has graduated from the program.

Mr. Bradt was also recognized as a scholar-athlete earlier this year when he received the Coach’s Award for his participation in the Modified Wrestling season. The Coach’s Award goes to a student athlete who continually functions as a role model for his teammates.

As a multi-sport student athlete (volleyball, wrestling, baseball and physical weight training) with limited time in his day, Mr. Bradt comes into school early three days a week to train during intramural weight room. During this time, he not only trains for his own goals but also helps mentor younger student athletes. Acting as a model student athlete, he often reminds his peers of upcoming tests and assignments, and to remember to show gratitude to those who support them. His attitude is truly that of a leader – he works hard to achieve his goals, and he inspires those around him to work hard as well.