Budget Vote and Board Election – May 21 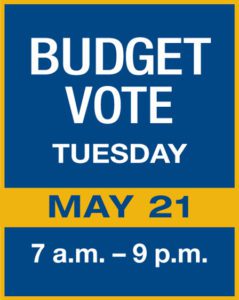 The proposed tax levy increase is 3.69%, which is below the New York State property tax cap of 4.84% that applies to East Greenbush, requiring a simple majority to pass the budget.

In addition to the school budget, voters will decide on the purchase of eight new school buses out of the Bus Purchase Reserve Fund and elect three Board of Education members to three-year terms.

2019-20 Budget Vote and Board Election Ballot

Board of Education Election