Howard L. Goff Middle school staff generated an “Alternative Education” schedule for students who did not attend the Washington, D.C. field trip last month. Teachers worked during their planning and lunch periods to create a variety of hands-on activities.

In the end, students were offered more than 20 choices and created their own schedules using Google forms. The goal was to engage students in activities that stimulated both their soft and hard skills throughout the day.

Staff from Physical Education and Health partnered with the local bowling center to provide students with two hours of physical, social-emotional interactions. This offered the daily recommended allotment for physical activity in schools. While meeting the recommendation, bowling gave the students a hands-on approach to lifelong physical activities that they do not normally achieve during a typical school day.

Mrs. Barnes led a “Summer Reading Book Tasting” in which students sampled a variety of books, jotted down titles that looked interesting, and even created bookmarks. The classroom was transformed into a restaurant complete with tablecloths and some tasty treats. 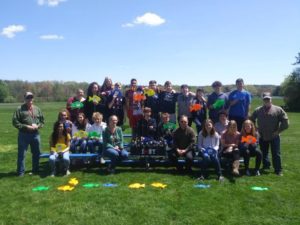 Staff from the Physical Education, Health and Science, Special Education and Technology classes coordinated with the NYS Department of Environmental Conservation to offer a 2.5-hour intensive Introduction to Fishing class for students.

Coordinated by Mrs. Oliva with support from Junior Achievement, nine students participated in a job shadowing trip to Upside Collective. The company, co-owned by Brendan Casey, a Goff Middle School alumnus, is a design and marketing firm located in Albany. Students wrote and filmed a 30-second promo video about Goff.

In math classes for 8-2, Mrs. Hadley’s students worked on problem-solving skills. A card trick was presented to students and in groups of two, and they had to figure out the order of the cards that made the math trick work. Students worked diligently to discover the correct order and then perform the card trick themselves. Then, students were taught a trick for multiplying numbers that end in five, and they were  “amazed”  by another card trick at the end of class.

Students were happy to play lawn games outside in the fresh air. Mr. Kovall and Mr. DeNisio taught students the rules to games such as Kan Jam and bocce ball.

Activities that students might find at family or community gatherings were offered by the PE & Health staff in the gymnasium. 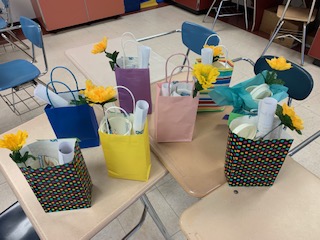 A group of six students worked together to create small gift bags for teachers and staff around the school. Each bag contained a mug and little treats with a note that reads “You’ve been mugged!” Each of these teachers were then challenged to fill a mug and surprise someone else in the building with it, spreading cheer throughout the school. The students chose which staff members they wanted the gift bags to go to. They also wrote positive messages on post-it notes that were posted on teachers’ doors.

Like many children of the 80’s, Mr. Bresnahan loves classic video games. So he brought in his Nintendo Classic and Super Nintendo Classic game consoles. Mr. Denisio provided a Playstation 2 (not quite retro, but still a decent choice). Mr. Bresnahan then proceeded to watch the current Fornite generation flail around and try to be successful at games such as Mario Bros., Altered Beast, Mario Cart, Bubble Bobble, Balloon Fighter and others.

Mrs. Lichorowiec directed some Social Studies enrichment activities for the students who stayed back from Washington. Students learned historical details about the Tuskegee Airmen and African Americans in the U.S. military and enjoyed the film, supplementing their studies of World War II. Students also played “Social Studies Pictionary” to review key concepts from the school year in preparation for their final exam.