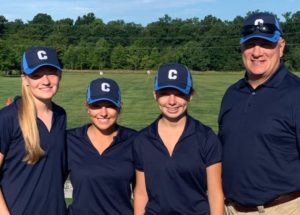 Columbia High School seniors Schuyler Lorette and Logan Plowinske are making history on the golf course this season. Though they have both played golf for Columbia since they were in middle school, they are now hitting the links on their own girls’ golf team – the first one in school history.

Along with sophomore Sarah Powis, who attends Tech Valley High School but plays for the Blue Devils, they are making the most of this new opportunity.

“It’s definitely a lot better,” Ms. Lorette said of having their own team now.

“You get to meet new people, too,” added Ms. Plowinske.

Both golfers will be competing in the inaugural Section 2 Girls Golf State Qualifier on Friday at Fairways of Halfmoon, with the state championships scheduled for Spring 2020. They will be playing as individuals because schools need at least four golfers for the team competition.

“The girls have done an outstanding job this season,” said Columbia coach Jim Obermayer. “They are a committed group of athletes that have put in the extra effort and we are seeing the results. I am very excited for them going into the Girls Sectional Qualifier.”

Up until this season, girls from Section II who wanted to play golf for their high school teams were required to tryout for boys’ teams. That has all changed with the creation of girls’ golf teams. They have their own schedule of matches and their own state tournament qualifier.

Good luck to the Columbia girls’ golfers at the Sectional Qualifer!

**UPDATE** The Sectional Qualifier has been rescheduled to Friday, October 11 due to Monday’s weather forecast.

2019 Suburban Council Girls Golf Champion Schuyler Lorette. Schuyler shot a 42 to take low medalist out of over 30 girls. Logan Plowinske tied for 5th with a 47. pic.twitter.com/XS7g6mJj3e