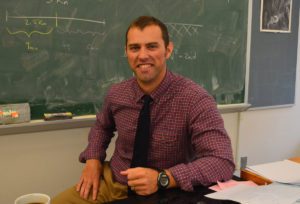 Columbia High School science teacher Tom Ross has been selected as a NYS Master Teacher. As part of the program, Mr. Ross will participate in professional development and attend leadership workshops over the next four years.

The Master Teacher Program was launched by Governor Andrew Cuomo in 2013 in partnership with The State University of New York and Math for America.

“It is all about collaborating with other teachers in our region, teachers from different school districts and other disciplines,” Mr. Ross said. “I will be participating in an increased amount of professional development both in STEM and pedagogy, and I’ll be able to share things that I’ve done in my classroom with other teachers.”

Mr. Ross, who has taught at Columbia since 2008, started his career as a research scientist, but he wanted more social interaction in his job.

“At the time, I was tutoring and I really enjoyed that,” he said. “It was just really fun. I love science and I love talking about it so this is a way to check both of those boxes.”

Mr. Ross brings as much of that fun to his physics lessons as possible, whether he has students launching potatoes out of a cannon behind school or dropping pumpkins from the football field bleachers. He builds engaging lessons that get students excited to learn about physics.

“You get to see them grow and change, and teach them about things that matter,” he said.

Mr. Ross serves as chair of the Science Department and is involved with two academic extracurricular activities. He is an advisor with Serious About Science which hosts events at Columbia such as Dinner with a Scientist and V-Healthy Day and he helped create Columbia’s chapter of the Science National Honor Society last year.