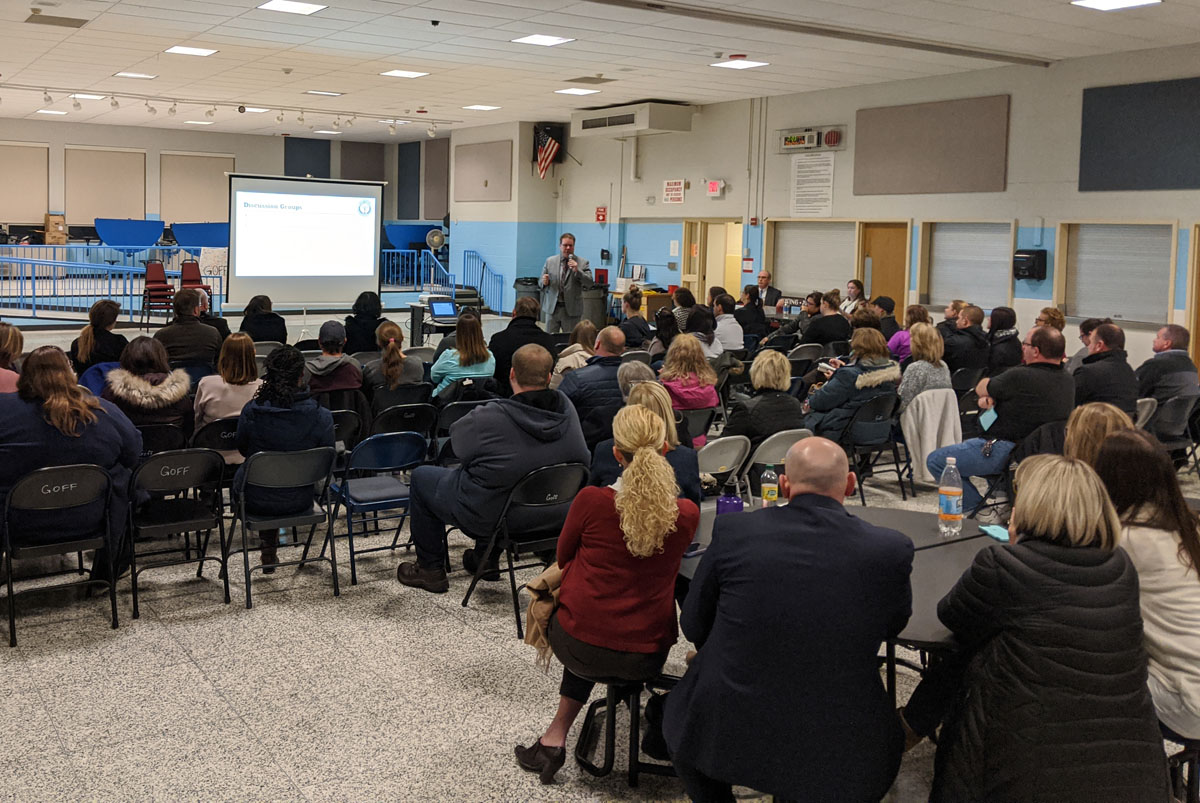 East Greenbush Central School District held its third community forum to discuss school start times on Thursday evening at Howard L. Goff Middle School. At the end of the meeting, Superintendent Jeff Simons told the audience that he plans to recommend to the Board of Education that the district continue to study school start times and not implement any changes for the 2020-21 school year.

The School Start Time Committee has a meeting scheduled for next month to discuss the feedback received from the three community forums and to develop a new survey that includes more detailed questions about the current proposal and the impacts it would have.

“Based on the feedback that we’ve received, I think we have more work to do,” Mr. Simons told the audience of approximately 85 people. “I don’t feel that we’re ready to make any change for September based on these discussions.”

In general, there has been support for later start times at Columbia and Goff because it could benefit the students academically, socially and emotionally, but there are some concerns over the later dismissal of the middle school and the earlier start time for the elementary schools. At the first public forum, parents of elementary students asked for a start time closer to 8:00 a.m. However, it is not a simple adjustment when considering all of the logistical challenges such as state attendance regulations, busing and after-school activities including athletics.

Many questions and concerns regarding the proposal were expressed at the three community forums through discussion groups and Q&A sessions, and 179 comment cards were submitted by audience members.

Mr. Simons, who led each of the community forums, thanked the parents and staff members for engaging in this process.

“I know all of you came here tonight because you’re concerned about your kids, you care about the district, and we appreciate the support,” he told them.

The district began studying the school start time topic in September 2018 by creating a committee comprised of school staff, parents, students, administrators and Board of Education members. The purpose of the study is to determine if scheduling changes could improve the general welfare of students, if they are feasible and would they be supported by the community.

At 7:10 a.m., Columbia High School currently has the earliest start time in the Capital Region. Students, parents and staff have expressed concern over this issue in recent years.

However, it is a complicated issue to push back the high school start time, because it would impact the middle school and elementary school schedules, and therefore, all staff and district families.

“We want to get this right,” said Mr. Simons. “To do that, our committee needs to discuss all of the feedback we have received before any next steps are taken. I thank everyone for sharing their views with us because any actions we take have to include the input of the community.”

The school community will continue to be updated throughout this process. Please visit the School Start Time Committee webpage for more information.