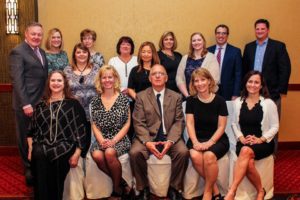 East Greenbush Education Foundation Board of Directors at the 2019 Gala.

The East Greenbush Education Foundation is now accepting nominations for the Columbia High School Alumni Hall of Fame and the Community Leader Award.

Candidates for the Columbia Alumni Hall of Fame are selected annually by a committee for demonstrating one of the following:

The Community Leader Award is given to a resident of the East Greenbush Central School District, not a graduate of Columbia High School, who demonstrates:

Nominations for both categories are due by December 30, 2019. After inductees are selected, they will be honored at the Education Foundation’s annual Gala on Friday, April 3, 2020.