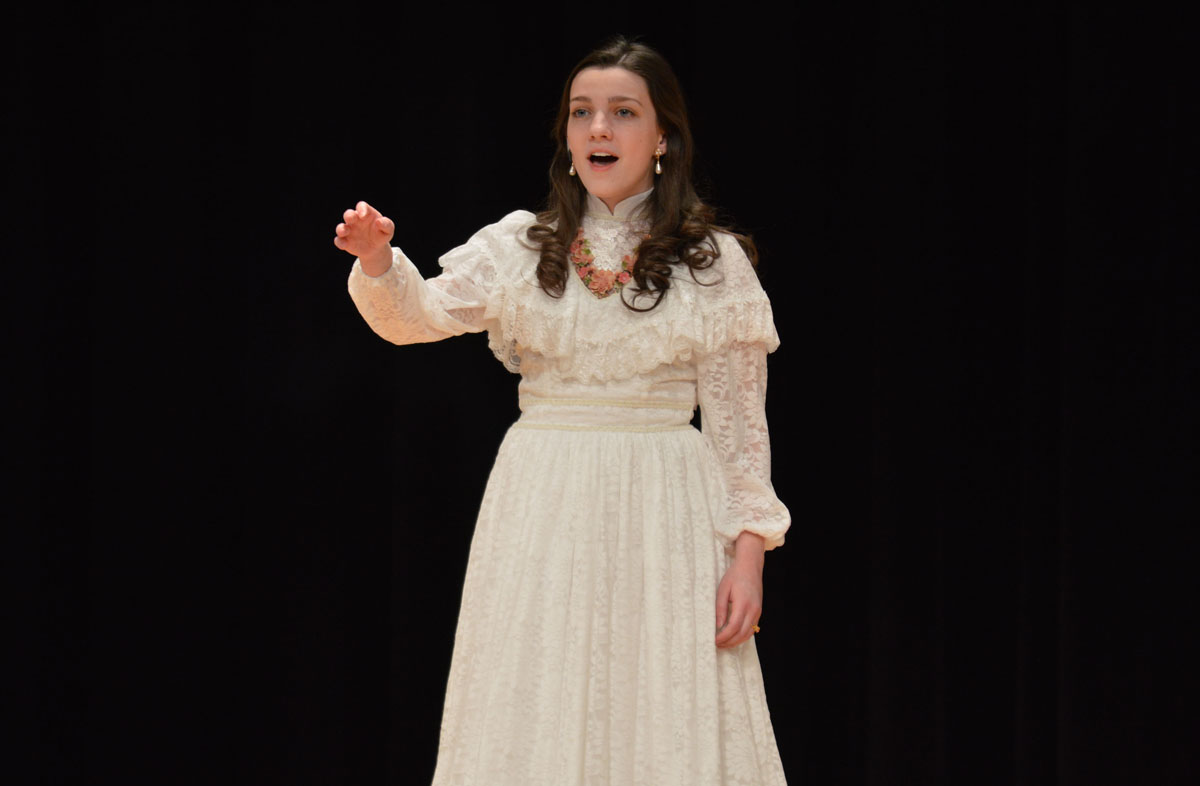 Meaghan Almon singing on stage at a dress rehearsal for “The Secret Garden.”

The Columbia Players are performing the musical “The Secret Garden” on Friday, February 28 and Saturday, February 29 at 7 p.m. in the high school auditorium. Tickets are available at the door and cost $12 for students/seniors and $15 for adults.

We stopped by a dress rehearsal earlier this week to see the cast and crew preparing for the shows. Here’s our conversation with one of the stars, Meaghan Almon ’20.

Q: For those who aren’t familiar with “The Secret Garden,” what is the story about?
A: The show is about a little girl named Mary Lennox who lives in India when a Cholera outbreak kills her parents. She is sent to live with her Uncle Archibald Craven in his haunted manor. She discovers all the secrets hidden throughout the house and helps brings the Cravens back together.

Q: What role are you playing?
A: I’m playing Lily, who is Archibald’s wife.

Q: What do you like about your character?
A: My favorite thing about her is that she is a really loving person. Her sister Rose thinks Archie is flawed and doesn’t want Lily to be with him, but Lily doesn’t see him that way and loves him anyway. 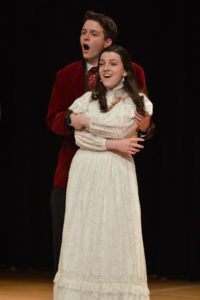 Meaghan Almon and Eli Wein performing together at a dress rehearsal for “The Secret Garden.”

Q: What is your favorite part of the show?
A: My favorite part of the show is the song “How Could I Ever Know” when the audience really sees how deep Archie’s despair is and how much pain he is in, and Lily sees it even more then, too. Archie falls to his knees at the beginning then Lily’s ghost appears to comfort him. Eli (Wein), who plays Archibald, and I get to sing this beautiful song together at a very poignant moment in the show which I always love. By the end of the song Lily has helped Archie heal and start to move forward in life, ultimately leading him back to the garden he locked himself from for so many years. It’s such a moving piece and I always feel so fortunate when I step onstage to sing it.

Q: How do you compare this show to other ones you’ve done in the past?
A: This one for me specifically is the most challenging show I have ever done vocally, because of how high most of my songs are, but in general I think what makes this show different is the extent to which we really delved into the meaning of the words. You have to do that with every project you work on, but this show especially has symbolism and deeper meanings all throughout the text. It’s been fun for us to interpret the meaning and convey it to the audience.

Q: How are the rehearsals going?
A: Rehearsals have been going really well! My favorite thing about being a part of these shows is always the people I get to work with. People not involved with the shows usually think the actual performances are the fun part of the process, but going to rehearsal every day after school is just as great. We have so much fun together, laugh a lot, and I wouldn’t change a thing! The performing arts are centered around collaboration, and having a cast that’s really supportive and so pleasant to work with has been great.

Q: Why should people come out and see this musical?
A: People should come see this musical because it’s a story of healing. Throughout the show we take a hopeless situation and bring light to it, and Mary helps the people she meets really live again and the other way around.

Watch the official trailer of “The Secret Garden” coming to the Columbia High School auditorium this Friday and Saturday at 7 p.m. pic.twitter.com/Iui4ivgvtK