All EGTA Members Named ‘Teacher of the Year’ 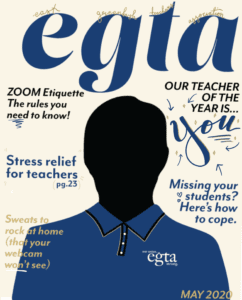 Under these extraordinary circumstances, and in recognition of the outstanding dedication from every teacher and instructional staff member, the EGTA Teacher of the Year award is being given to All EGTA Members.

Since 1970, the East Greenbush Teachers Association has honored one of its members by awarding them with Teacher of the Year. The award is traditionally given to an individual member of the district’s instructional staff, however, this school year has been anything but traditional.

The school year was radically changed in mid-March when schools across the state were shuttered abruptly in response to the COVID-19 pandemic. Overnight, teachers and staff adapted the normal classroom experience for students and began teaching through a distance learning model. Teachers worked from home to setup Google Classrooms, create lesson plans, record lessons, and research and utilize new apps for teaching.

In addition to the actual teaching of students, teachers and other instructional staff have continued to connect with students during this challenging time. They have made regular phone calls and wellness visits, hosted video chats with groups of students, and organized parades and other fun events with social distancing to show students and families that although we cannot be together in schools right now, we are together in spirit always.

Under these extraordinary circumstances, and in recognition of the outstanding dedication from every teacher and instructional staff member, the EGTA Teacher of the Year award is being given to All EGTA Members.

“Given the challenges faced and conquered that each of us has over these past few months in guiding students through this global pandemic, there is no better way to honor one than to honor all,” EGTA President Drew Romanowski said in an email to EGTA Members. “Through this journey that no one asked for, each of you has remained steadfast in your commitment to your students while doing so with grace, humor, courtesy, decency, and a tireless dedication to serving the whole child and all of their needs.”

A special thanks goes to the Teacher of the Year Committee Co-Chairs Christine Dushensky and Kristen Zilgme for their time and effort throughout this process as they graciously serve in this role.