East Greenbush CSD schools and offices will be closed on Monday, October 10. 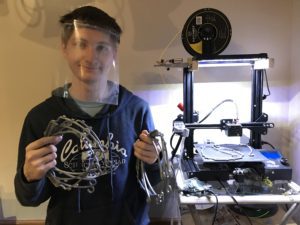 Owen Ball ’20 showing off some of the face shields he is making with his 3D printer at home.

Back in April, Columbia Physics teacher Rich Hill posted on Google Classroom a link for making face shields to meet the demand of frontline COVID-19 workers. He asked students, if they had a 3D printer at home, to consider producing these needed face shields using a template.

Almost immediately, Mr. Hill received a reply from one of his students. The message from Columbia senior Owen Ball simply said “Already on it” and included an image of face shields stacked up in a pile.

“It was Owen’s initiative and tech-savvy that really got things going,” said Mr. Hill. “I’m proud of his willingness to use his considerable skills to help others. Being the class valedictorian is a credit to his intelligence and his work on this project is a credit to his character.”

Mr. Ball said he began making these face shields on his own 3D printer at the end of March. After about a week, once he realized that he would be able to supply a large number of these shields, he signed up as a printer for the Northeast Face Shields Project, which distributes face shields to local hospitals for free.

Columbia administrators helped Mr. Ball with the project as well, loaning him a second 3D printer so he could increase production.

Mr. Ball is a standout student at Columbia High School. Just last week, he was named valedictorian of the Columbia Class of 2020. After graduating, he plans to major in Electrical and Computer Engineering at Carnegie Mellon University.

“Owen is an amazing person who has always worked to help others,” said Principal Michael Harkin. “His efforts to support frontline workers is inspirational to the entire East Greenbush community.”