Karen Curran Announces Resignation from Board of Education, Board Seeks Volunteers to Fill Position 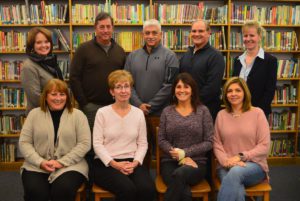 Karen Curran announced her resignation from the East Greenbush Central School District Board of Education at the June 24 public meeting, concluding 13 years of service.

“It’s really with a heavy heart that I’ve decided to resign my position as a school board member due to some personal and medical issues,” Ms. Curran said during the meeting. “It really has been an amazing journey and been an honor and privilege for me to serve the East Greenbush Central School District in the manner in which I have over the past 13 years. I want to thank everybody who’s been involved, allowing me to serve our community in this capacity.”

“I really am proud and thankful that I’ve been able to be a part of this amazing journey over the past 13 years,” she continued. “I have a genuine respect for everyone involved in public education and our system and know how dedicated everybody in East Greenbush really is to provide the best quality education to our students.”

Since Ms. Curran joined the Board of Education in 2007, East Greenbush has steadily improved its position in the Capital Region, offering new and innovative programs all while maintaining fiscal responsibility during challenging times for public education.

“I want to thank Karen for her many years of board service,” said Michael Buono, Board of Education President. “Her dedication to the district and its students has been exemplary. My board colleagues and I will miss her guidance, wisdom and historical perspective.”

The Board of Education is seeking volunteers interested in filling Ms. Curran’s position. The person who is selected by the Board will serve until the next regular election on May 18, 2021.

To be eligible, a candidate must be:

The candidate chosen to fill the vacancy has the option of running for one of four available seats in the 2021 election – three with terms July 1, 2021 to June 30, 2024 and one with a term of May 19, 2021 to June 30, 2022 (the remainder of Ms. Curran’s unexpired term). The candidates with the three highest vote totals would be appointed to full three-year terms. The candidate with the fourth highest vote total would fill the remainder of Ms. Curran’s term and be seated on the Board immediately following the election.

The Board of Education is a team of nine volunteers elected by school district voters to establish policy and set direction for the administration. They hold public meetings twice monthly.