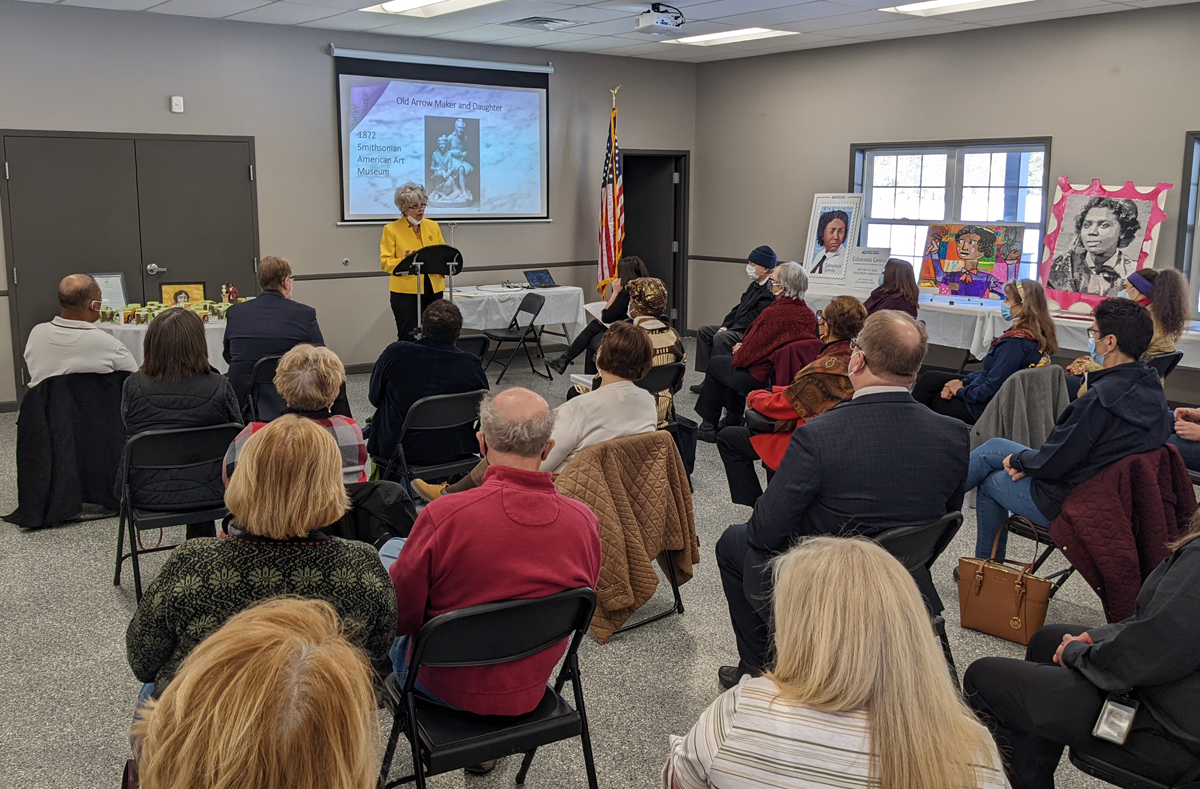 Town Historian Bobbie Reno recounts the life of artist Edmonia Lewis at a Town of East Greenbush celebration on Wednesday in the town park’s Red Barn.

Artwork from across the East Greenbush Central School District was prominently displayed at a Town of East Greenbush ceremony honoring Edmonia Lewis on Wednesday afternoon in the Red Barn at the town park. The famous African American and Native American sculptor, who was born in 1844 in Greenbush – what is now East Greenbush, North Greenbush and Rensselaer – was recently recognized with her own stamp in the U.S. Postal Service’s Black Heritage series.

Students created black and white drawings, colorful quilts and mixed media depicting Ms. Lewis. The artwork was featured at the celebration, along with a poster-sized image of the stamp and a presentation showing Ms. Lewis’ most famous sculptures.

The dedication ceremony, which fittingly occurred during Black History Month, brought together town, county and state officials to celebrate Ms. Lewis and her accomplishments.

Ms. Lewis persevered through social barriers during the 19th century to become a prolific artist. However, her work was largely forgotten following her death, some pieces having been lost forever. Only in recent years has her artwork returned to prominence.

The research of Town of East Greenbush Historian Bobbie Reno has brought Ms. Lewis’ story to a wider audience by publishing a children’s book about the hometown hero, securing funds to restore her gravestone in London, and now, earning her a place on a U.S. stamp.

“Edmonia Lewis is someone the residents of our area can be proud of,” said Ms. Reno. “She was a famous sculptor, whose beautiful sculptures received worldwide appreciation and enjoyment. She is the first African-American/Native American woman to be recognized for her artwork. She did not let obstacles of discrimination stop her from her goal of becoming a sculptor.”

Ms. Lewis’ work is on exhibit in famous museums across the world including the Metropolitan Museum of Art and Smithsonian American Art Museum.

Katie Miecznikowski: “Each fifth grade artist at Genet painted one section of a picture of Edmonia Lewis using a photographic reference. Then, we assembled the sections to form a series of portraits, including the one showcased at the town celebration. This special artmaking experience connects to our painting unit, where students are learning about creating monochromatic color schemes and using photographs as reference tools.”

Karli Powers: “Students worked in small groups to design a square of a large illustration done in black ink of artist Edmonia Lewis. The Students needed to fill spaces designated by color based on a vote the class took to decide color choices. For the background, students were introduced to contemporary artist Bisa Butler and her bright and colorful patterned quilts. Both Edmonia Lewis and Bisa Butler are two African American artists who have opened the door and are paving the way for women of color in the arts. Once all squares were completed, they were put together to reveal the beautiful portrait of Edmonia Lewis.”

Amy Dunaief: “It was really wonderful to see the enthusiasm the students at Goff had in honoring the artwork and lifetime of Edmonia Lewis. Many of our students showed extra dedication by taking their work home to really make sure they did her justice.” 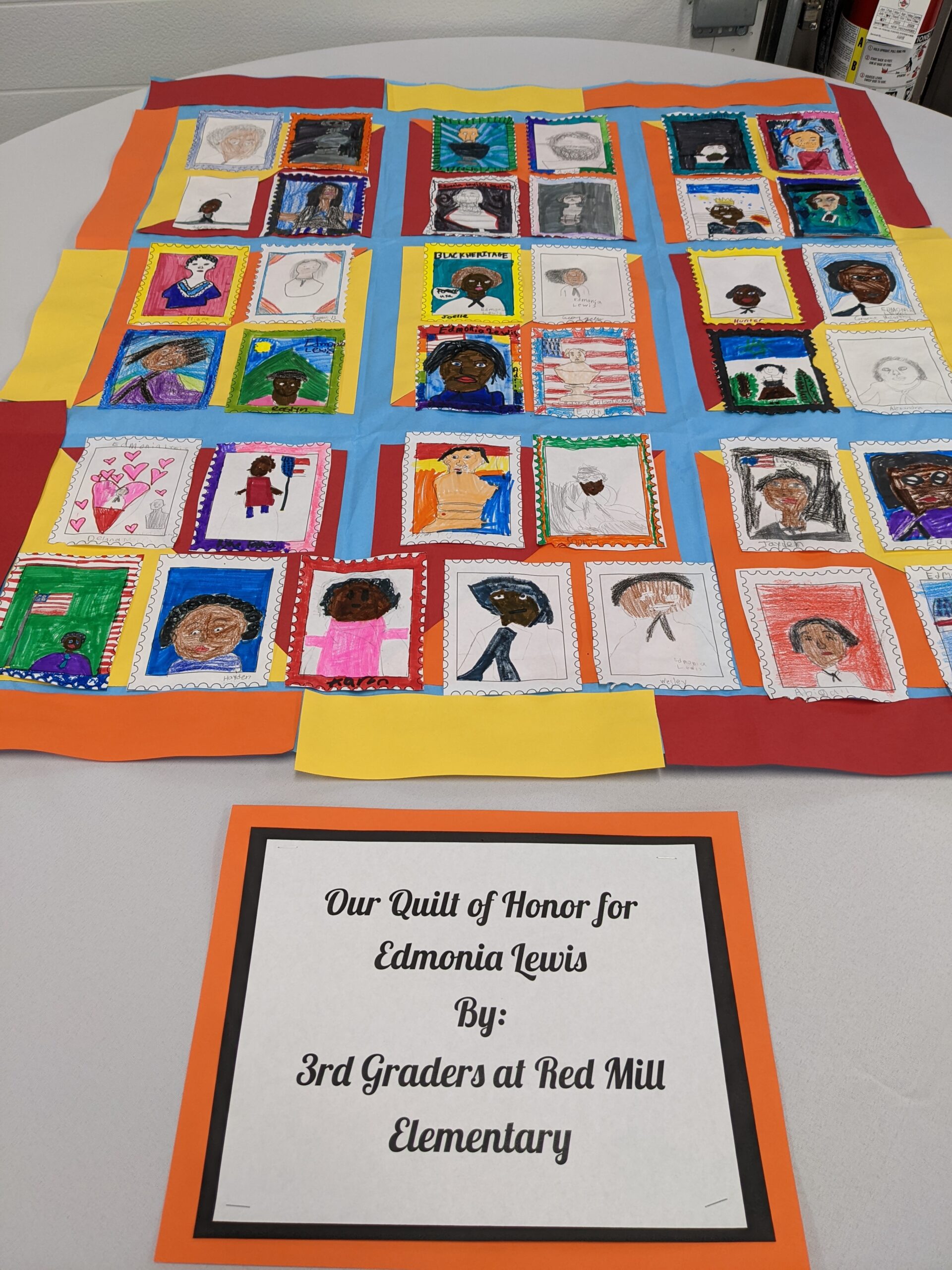 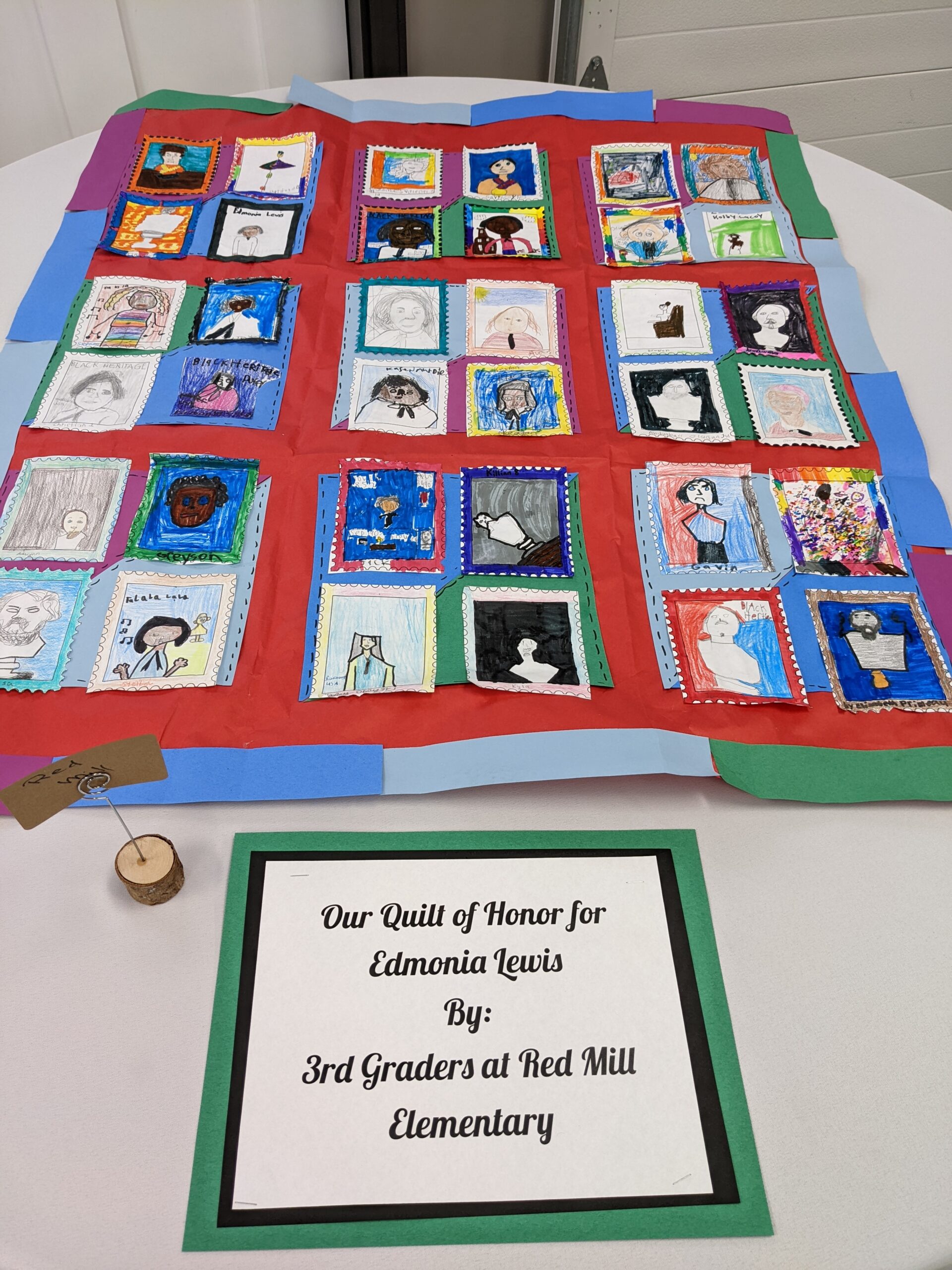 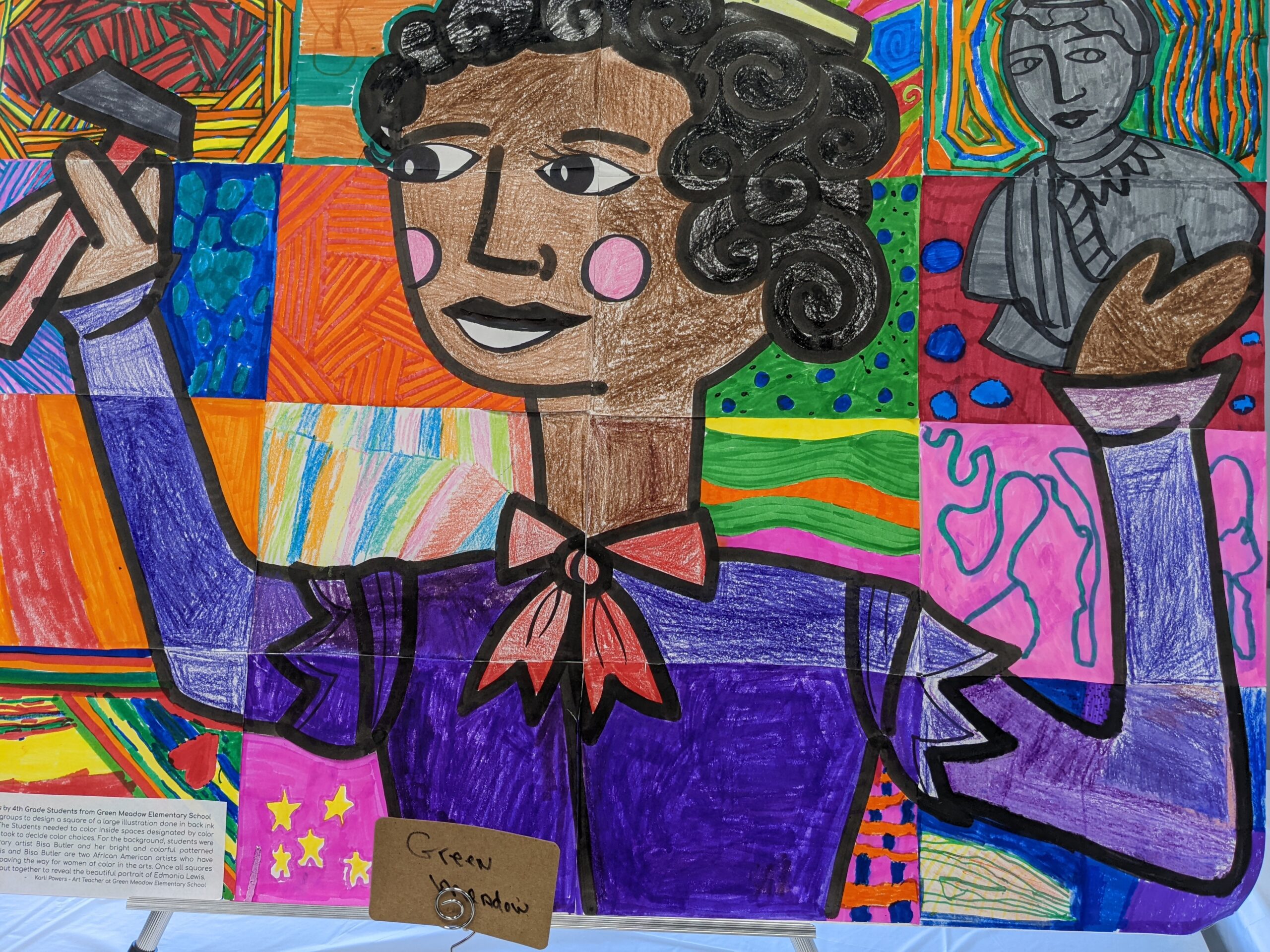 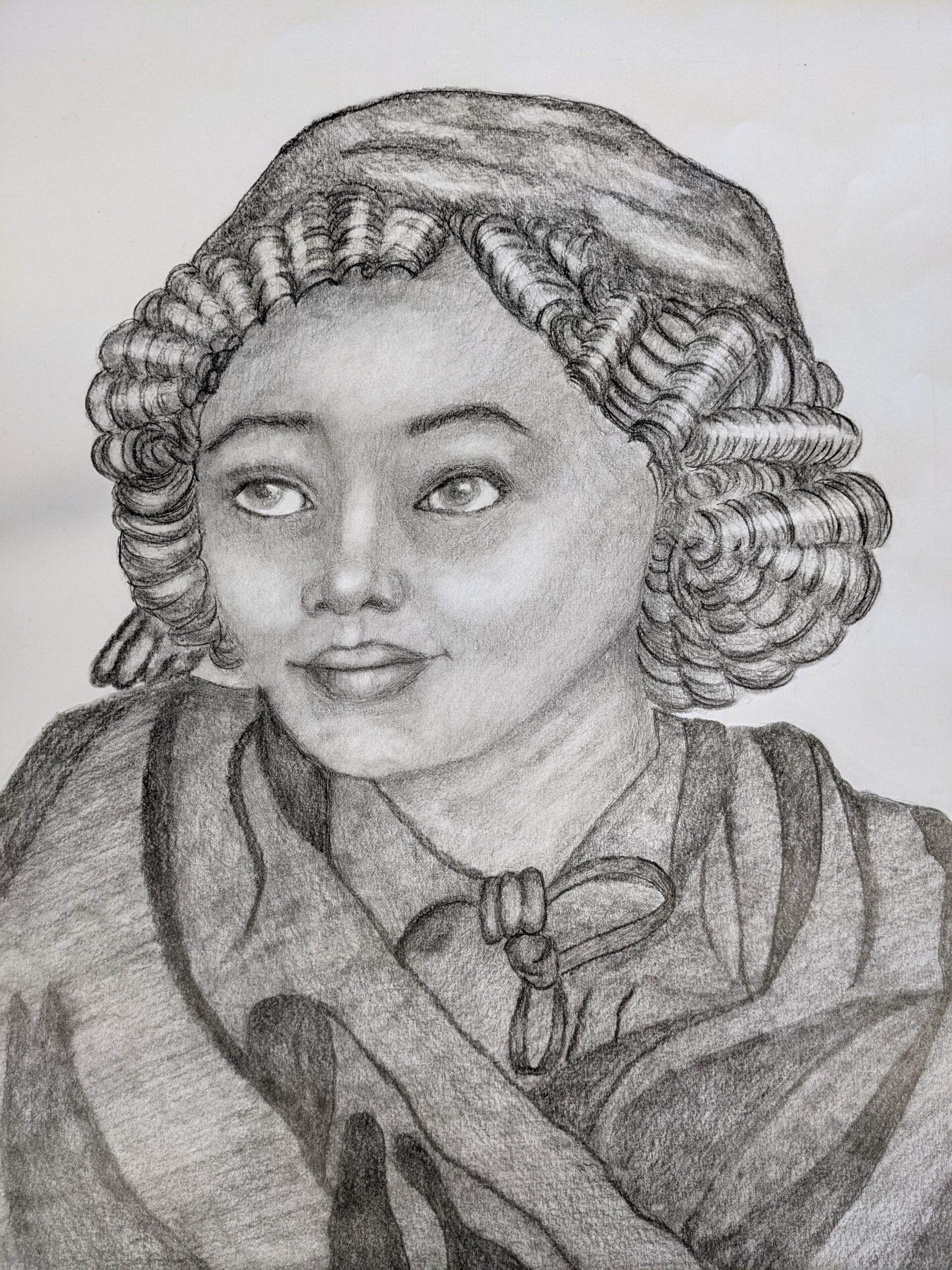 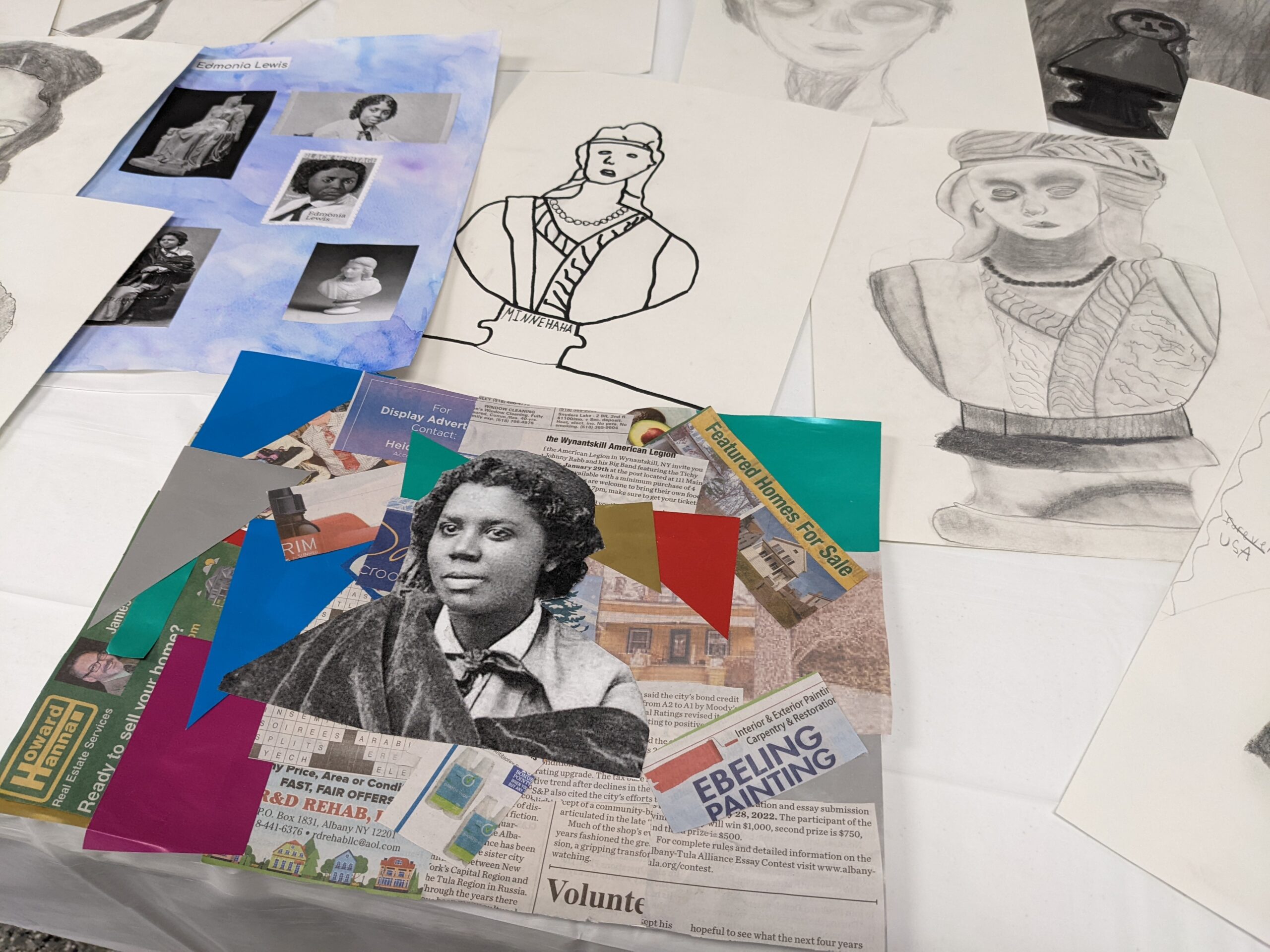 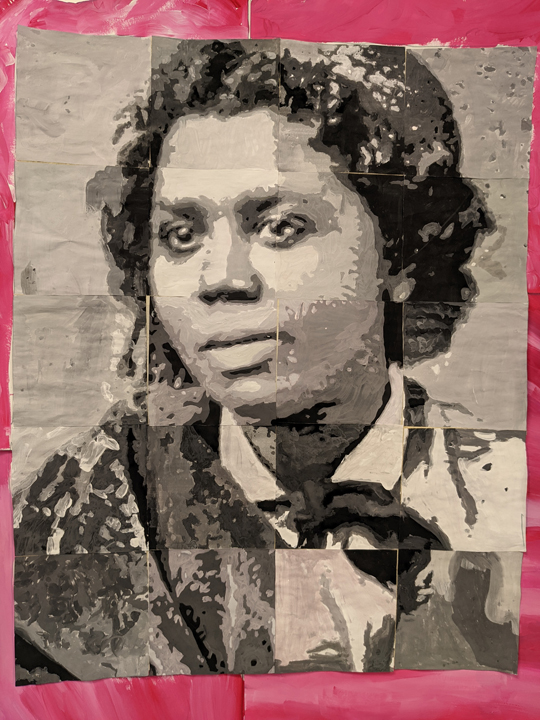