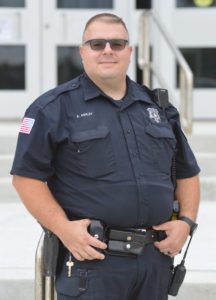 Officer Ashley started his new position in August and will be at Columbia every school day. He is responsible for creating a safe and positive school environment, educating staff and students on various safety topics and serving as a resource to the community.

Officer Ashley has been a police officer for 10 years, with the past seven years in East Greenbush. He had been a patrol officer with special duties as a bike patrol officer, drone operator, medical emergency care coordinator and recently earned certification as an evidence technician. He earned his SRO certification this past summer.

Each school day, Officer Ashley walks the building before students arrive. He greets them in the lobby as they enter school, assists with traffic control, attends meetings, participates in safety drills and is present in the hallways throughout the day.

“Officer Ashley has been extremely supportive of the students during this first week,” said Columbia Principal Michael Harkin. “He will be a valued member of the Columbia learning community.”

Officer Ashley is currently creating safety presentations for Columbia and other schools in the district on the topics of halloween safety and social media safety, which will be a point of emphasis throughout the district this year.

“With kids having access to more and more technology it’s important that they understand their actions have consequences and affect people outside of just the internet bubble,” he said.