East Greenbush CSD and Sorensco Team Up for Field Improvements

The Sorensco baseball field, which is located next to Howard L. Goff Middle School, was replaced this summer. The project included new sod for the field, new clay for the pitcher’s mound, drainage work, and new bases and home plate.

The school district contributed $19,240 in materials, including sod for the infield, clay for the pitcher’s mound, drainage pipe and sand, and new bases and home plate to ensure the field is brought to “a safe and playable condition,” according to Sorensco’s proposal. Sorensco provided the labor for the project.

“This project is exciting for the East Greenbush and surrounding baseball community. The field looks spectacular and will be much safer to play on,” said Sorensco President Andy Garrigan. “Sorensco is very grateful for the school district and all of our sponsors for helping to make this happen.” 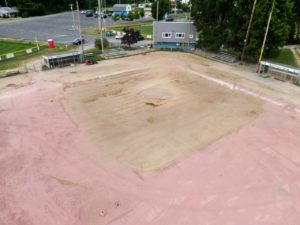 The Sorensco baseball field under construction this past summer (photo courtesy Sorensco).

The property is owned by the school district and used by school, recreation and travel baseball teams. Sorensco estimates that more than 100 games and 100 practices are played on the field each season.

“I am pleased that we were able to partner with Sorensco to upgrade the field, enhance safety and improve field conditions for the players,” said Superintendent Jeff Simons. “At the encouragement of our board of education, we support these types of collaborative projects with our community partners because they make perfect sense as we serve the same kids and taxpayers.”

The Sorensco baseball field is currently closed as the new grass establishes roots. It is expected to reopen in Spring 2023.

Sorensco Baseball is a 501 (c) (3) nonprofit organization that has been serving the communities of East Greenbush and Schodack, as well as southern Rensselaer and northern Columbia counties for over 70 years. Sorensco provides competitive recreation league and travel baseball for youth ages 13-18 in the community. In recent years, the league has been expanding rapidly: two years ago, it had just two spring recreation teams and three summer travel teams at the 15U, 14U and 13U levels. Under the direction of the present board, the league has since expanded to five spring recreation teams and seven summer travel teams – 17U, 16U, 15U, 14U, two teams at 13U, and a 13-15 rec team that plays a summer schedule against neighboring leagues. Thus, the league now offers competitive, affordable community-based baseball to almost 100 families in the region.