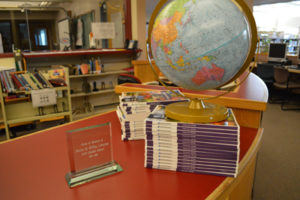 Howard L. Goff Middle School’s library received a globe and a set of 30 new atlases on Tuesday in memory of former librarian Shirley May Riffley.  The donation was made in her name after she passed away earlier in March. She was 96 years old.

The donation was made by Sheila Patterson on behalf of a group of friends and former co-workers of Riffley. Riffley worked in the Goff library from 1969-1980.

Patterson and her friends wanted to make a donation to a charity in Riffley’s name, and immediately thought of the school where she had taught.

“This is wonderful,” said current librarian Mary Ellen Bolton. “It’s great to have all of the electronic resources, but sometimes having the atlas in front of you makes a difference.”

Bolton and Principal Wayne Grignon thanked Patterson for the donation and told her the resources would be put to use right away.

“It’s a great asset,” said Goff principal Wayne Grignon. “We rely on our communities to help our schools, especially when funding is in flux.”