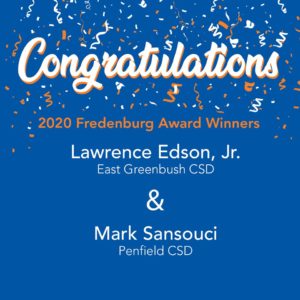 Assistant Superintendent for School Business Finance Lawrence Edson received the 2020 Fredenburg Award from the Association of School Business Officials New York last month. The award is given out annually to a school business official who has had a positive impact on school finance.

As the chief business official in the East Greenbush Central School District, Mr. Edson is responsible for managing the district’s finances, overseeing the management of state aid and SED filings, developing the annual school budget, supervising the implementation of insurance, participating in contract negotiations and serving on the Council of Administrators.

Thanks to his effective financial stewardship, the district has received a “no designation” fiscal stress score, indicating a low level of fiscal stress, from the New York State Comptroller’s Office every year since the monitoring system was created.

Mr. Edson has worked in the district since 2001 and plans to retire later this summer.

“I am very grateful for the recognition from my colleagues and the long-term support from the school community,” said Mr. Edson.

Congratulations to our 2020 Fredenburg Award Winners: Lawrence Edson from @EGreenbushCSD and Mark Sansouci from @PenfieldCSD

This honor recognize careers that had a positive impact on school finance.