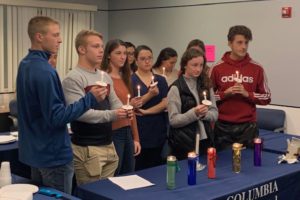 “We hope Rho Kappa will help you explore rich fields within social studies as well as your own potential,” Social Studies teacher Wendy McAlonie told the students at the induction ceremony.

Requirements for membership include a 90% GPA (unweighted) in all three years of Social Studies, documented participation in activities that demonstrate civic engagement in the school or community, completed at least one AP/Honors class in Social Studies with at least an 88% final average, and have completed or currently enrolled in at least one Social Studies elective course.

The Columbia chapter of Rho Kappa is named for the American hero Henry Knox who was a key figure in the American Revolution. At the end of 1775, the British Army still controlled Boston and General Washington knew he could dislodge the British if he attacked them from the heights above the city but he lacked the artillery to do so. Washington asked Colonel Henry Knox to organize the transport of 59 captured cannon from Lake Champlain to Albany and on to Boston. The cannon transport was vital to the war effort and East Greenbush played a pivotal role in ensuring the safe arrival.

Congratulations to the following students!