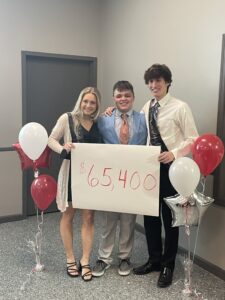 Columbia Kicks Cancer led by Taylor O’Brien ’21 and Chase Durivage ’21 won the Leukemia & Lymphoma Society’s Student of the Year Campaign and raised a new record of $65,400. The money will be donated to improve medical research for blood cancer patients.

Mr. Durivage and Ms. O’Brien began their fundraising efforts in January. Over the past eight weeks, they have organized a variety of charity events including dine and donates at local restaurants, a bowling tournament, and raffles.

“It means so much to me to know that everyone was willing to contribute to such an important cause,” said Ms. O’Brien. “This is an experience I will never forget and I am so happy to be able to help researchers come closer to finding a cure for blood cancer. I am so grateful that Chase and I were able to raise over $65,000 and we wouldn’t have been able to accomplish this without our hardworking team and generous community.”

“Being a part of the Student of the Year program this year was an experience I will never forget,” said Mr. Durivage. “It really helped open my eyes to a different world that I have never seen before. What surprised me was the amount of effort our community put into supporting our campaign which made a huge difference in the end. I hope to stay involved with the LLS because I’ve realized how much of a difference we can make.”

Special thanks to Columbia senior Ryan Blake ’21 who individually raised over $5,000.

About the Students of the Year Fundraising Campaign
The Students of the Year campaign is a philanthropic leadership development program through which highly motivated, high-school leaders embark on a journey of professional growth, ensuring that they stand out when preparing for college and beyond. During the program, students foster professional skills such as entrepreneurship, marketing, and project management in order to raise funds for The Leukemia & Lymphoma Society (LLS). Student leaders fundraise for LLS in honor of children who are blood cancer survivors. The title Student(s) of the Year is awarded to the candidate or co-candidate team in each community that raises the most funds during the 7-week competition.