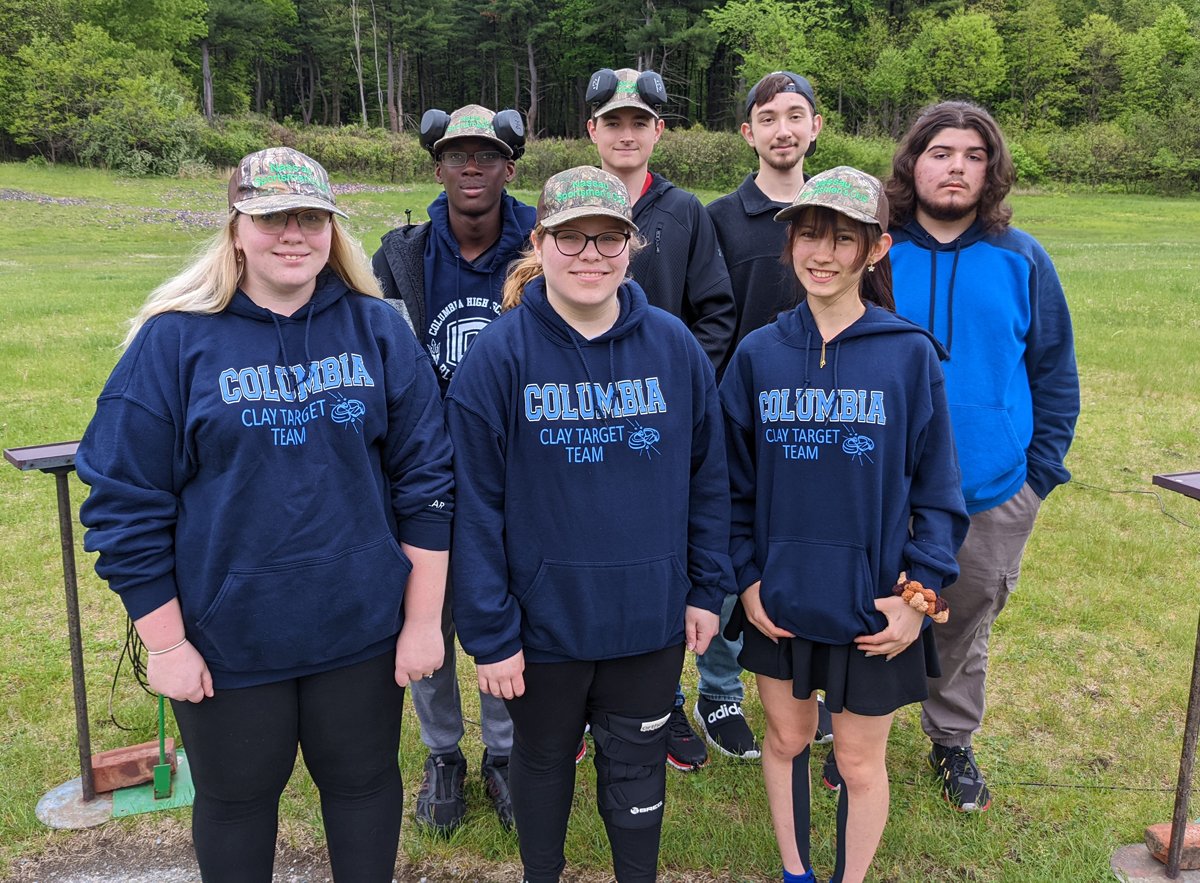 With a picturesque backdrop of lush green trees and chirping birds, four Columbia High School students stand at their stations looking out on an open field at the Nassau Sportsmen’s Club trap shooting range.

They are wearing ear protection and protective glasses and holding shotguns with the muzzles touching the ground. Behind them is a group of adults including their coaches – Columbia English teacher Laura Gedney and retired Social Studies teacher Pete Zilgme – and members of the Nassau Sportsmen’s Club, one of whom is wearing a red vest that says “RANGE SAFETY OFFICER.”

It is Athena Seebald’s turn at the range, so she raises her shotgun, looks into the field and says “Pull.” An orange clay target is sent flying out from a small shed, or trap house, and into the air. She fires the gun and small pieces of orange scatter and fall to the ground.

The students are on Columbia’s new Clay Target Team which competes in trap shooting.

The team, which has 11 students, received Board of Education approval last fall and began competition in March. The Blue Devils compete in the New York State High School Clay Target League. Each week, the team has a practice and a competition after school at the Nassau Sportsmen’s Club. Other teams in the league, including Burnt Hills-Ballston Lake, shoot at their own local clubs and the results are uploaded to a database.

Columbia finished the season in 5th place out of eight teams, an amazing accomplishment given that only four of the students had ever fired a gun before joining this team and none had shot trap. 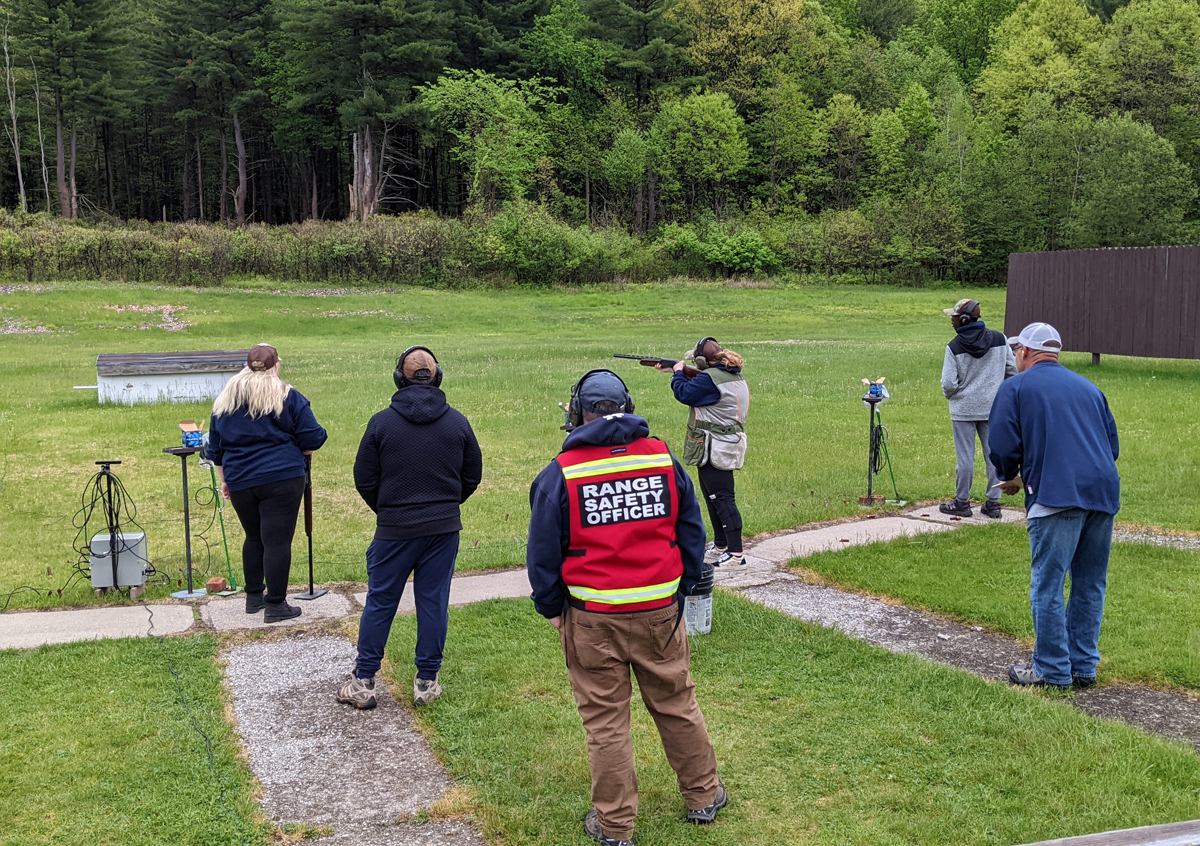 Before the season began, all of the students on the Clay Target Team completed a rigorous safety training program that included an online component and in-person training at the range. They learned all about trap shooting, parts of a firearm, ammunition basics, the rules of the range, and most importantly, how to safely handle firearms and ammunition.

All of the team’s shooting – both practices and competitions – are done in the controlled environment at the Nassau Sportsmen’s Club trap shooting range under proper supervision.

When the students are on the shooting range, they wear all of the required safety equipment and are monitored by their coaches, a Range Safety Officer and club members who are highly trained.

The 12-gauge shotguns and ammunition that the students use on the range are kept in a locked safe at the Nassau Sportsmen’s Club.

“It’s like putting a kid behind the wheel of a car,” said Mr. Zilgme, who shoots trap and hunts. “You teach them the right thing to do. You teach them safety. There can be no mistakes.”

“There have been no injuries in this sport at all anywhere in the United States,” he added. 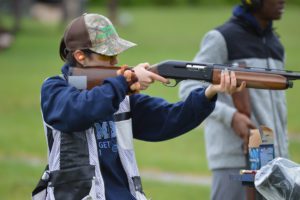 The students have improved through practice and instruction provided by sportsmen’s club members. In between rounds at the range, the club members talk with the students and give them tips to improve their fundamentals. Just last week, Ryan Krulikowski and Erik Schaummann both shot perfect games, hitting all 25 clay targets.

Each of the students have enjoyed shooting trap, learning a new skill and being part of a team.

“It’s been really fun,” said Lily Sager. “I’ve seen how I can work on new things and improve.”

And unlike other sports, size, speed and strength do not separate students and potentially exclude them from participating.

“You can be any size, any height in this sport. We can all do it,” said Skylar Quinn. 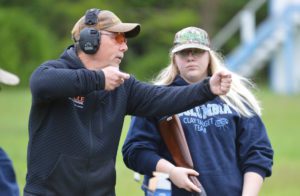 A member of the Nassau Sportsmen’s Club gives instruction to Skylar Quinn on the range.

One of the added benefits of the new Clay Target Team has been the interaction between Columbia students and the members of the Nassau Sportsmen’s Club. Their shared interest in trap shooting has brought together two groups – adolescents and older adults – that seldom interact outside of family.

The sportsmen’s club donates the use of their range for free, pays for all of the clay targets and members volunteer their own time to help mentor the students.

“The sportsmen’s club has been amazing,” said Mrs. Gedney, who noted that the club even built a storage room for Columbia’s firearms and ammunition.

The arrangement has been equally beneficial for the sportsmen’s club, which has helped bring new, young people into the sport they love. It has also shown them how disciplined, respectful and skilled the Columbia students are. 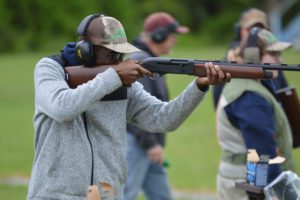 “Oh my God, it’s been a pleasure,” said Pete DeAngelis, a life member of the Nassau Sportsmen’s Club who runs the trap house for the students. “I can’t begin to tell you how well they’ve done. Impressed the heck out of me.”

Indicative of the school-community partnership, the club is hosting the team on Wednesday for a Fun Shoot and Cookout to celebrate the end of their season.

“Without (the sportsmen’s club) this wouldn’t happen,” said Mr. Zilgme. “Not just the facility, but everything they do. And that interaction is probably one of the coolest things.”